A group of retired NASA engineers looking to develop a spacegoing seaplane - or seagoing spaceplane - have suffered a setback, with a prototype craft reportedly exploding during tests at the weekend. 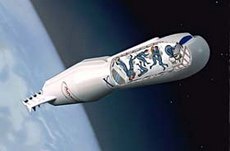 Pic courtesy of the X-Prize Foundation.

The Daily News of Galveston County in Texas reports that the explosion near Hitchcock, 40 miles from Houston, was loud enough to draw a lot of attention. The disaster was apparently investigated by the Hitchcock police and fire departments, the FBI, Homeland Security and the Bureau of Alcohol, Tobacco, Firearms and Explosives.

However, local police chief Glenn Manis said that nobody was injured and no property - apart, presumably, from the prototype sea/space plane - was damaged. The explosion was said to have taken place at the former Naval Air Station Hitchcock, a World War Two base for anti-submarine blimps, now largely deserted.

Despite the extensive federal interest, it seems that Akkerman wasn't arrested and/or besieged, shot etc. Police chief Manis and FBI spokesperson Shauna Dunlap confirmed that he had committed no crime.

Akkerman himself couldn't be reached for comment, but the Advent Launch Services website says that he was a NASA engineer for 37 years, retiring in 1999. The Advent Launch concept involves a two-stage reusable winged rocket, which takes off vertically from the sea. The winged, empty booster and - later, after the mission - orbiter glide down to land on water like flying boats. Sea landing is seen as more flexible and easier to achieve than trying to hit a given runway like the space shuttle, allowing simpler ships to be used.

The idea is that the rockets would run on liquid oxygen and methane, commercially available and easier to handle than liquid hydrogen and/or solid fuels as used in the current shuttle. The winged seaplane rockets would be cheaper to build and to operate than normal landbased ones: for instance they could simply be towed about in the water rather than needing mighty crawler-transporters, and "the refueling process will cause the vehicles to rotate into the vertical attitude, avoiding the typically used vehicle erection equipment".

Apparently Akkerman and his colleagues originally submitted their ideas in 1992 while still at NASA, but enthusiasm was lukewarm and indeed the space agency was happy to let them have the patents. Advent Launch Services was set up in 1999, but so far has made relatively little progress. The firm was a contender in the Ansari X-prize space race, but there was a technical mishap in testing resulting in a fire.

"Repairs could not be made before the prize was won by Burt Rutan," according to the company site.

More recently there have been other tech snags in ground tests during 2007, and now it seems a serious explosion. Nonetheless, Akkerman and Co remain upbeat, saying the only thing holding them back is lack of funds and greedy money men.

Investors have been interviewed, but they demand complete ownership, which violates our prime organizational principle, participant ownership. All the results to date have been funded with retirement pay and the contributions of the various commercial organizations that are to participate... When the financial support becomes available, we expect to fly the first vehicle within a year... The Advent team can put America back into the space activity leadership role within a few years.

"Space is a reality, not fiction," adds Akkerman. "Earth orbit is indeed a lot closer than you might think." ®