Google launching its own navy?

About 70 per cent of the Earth is covered by water. So Google's thinking it had better build some data centers that can float. 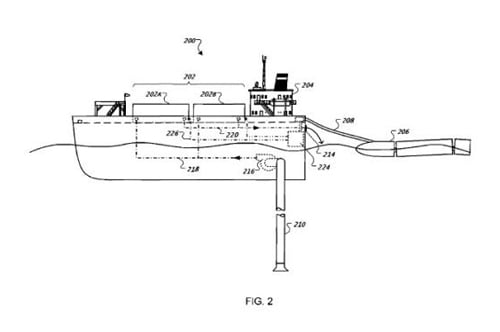 Google envisions its seaworthy data center serving land-bound humans in times of emergency. "For example," the application reads, "a military presence may be needed in an area, a natural disaster may bring a need for computing or telecommunication presence in an area until the natural infrastructure can be repaired or rebuilt, and certain events may draw thousands of people who may put a load on the local computing infrastructure.

"Often, such transient events occur near water, such as a river or an ocean. However, it can be expensive to build and locate data centers, and it is not always easy to find access to necessary (and inexpensive) electrical power, high-bandwidth data connections, and cooling water for such data centers."

Famously, Google has already patented data centers that tuck inside standard shipping containers, and these mobile modules would serve as building blocks for its water-based computer center.

Sergey and Larry might hoist their shipping containers onto that anchored ship. Or they might set them up on dry land, not too far from the waves. In either case, power could arrive from so-called Pelamis machines, Scottish-designed contraptions that convert waves into electricity. And seawater cooling units could keep all that shipping container-ed hardware from overheating.

Naturally, Google isn't the first to dream up such a thing. A company called IDS is working on its own floating hardware - though it sees things a bit differently. "IDS floating data centers will be anchored in port the majority of the time, whereas [Google's] will be positioned out at sea," reads a blog post from the company. "There [are] also some significant differences in the way sea water is used for cooling, and obviously some differences in power generation."

Of course, IDS isn't blanketing the planet with its very own built-from-scratch internet. We can safely say that Google is building its own servers, its own Ethernet switches, its own underwater comms cables, its own worldwide collection of brick and mortar data centers, and its own truck-em-anywhere-you-want-em mobile data centers. And now it looks like the company is well on its way to floating its own Data Center Navy. When we accused Larry and Serge of killing penguins, we didn't know the half of it. ®