Around about now, boffins will be eagerly awaiting news that protons are finding their way fully around the 27km circuit of CERN's Large Hadron Collider, the latest and best atom-smasher particle accelerator - and the biggest scientific experimental apparatus ever built.

This 10 September 2008 project milestone has captivated the mass media, despite the fact that the LHC began chilling-out back in August to allow its huge superconducting magnets to reach operating temperature. Full power operation testing is not scheduled until 2009.

Yet it would be amiss for us not to join in the jollity, so we here bring you the executive summary, shorn of the hype, conflations and bangs, of the state of play.

The Standard Model has been to modern particle physics rather what the periodic table was to 19th century chemistry. It served both to organise the known entities systematically, and as an impetus to fill in the holes in our knowledge. The Standard Model can claim to have predicted the existence of several previously unexpected particles, which were subsequently discovered experimentally. Arguably, too, it has also seeded the separate field of quantum information theory, and quantum computing.

From the point of view of having things neat and tidy, there is just one hole in the jigsaw of Standard Theory. The missing piece is the (by now surely) world-famous Higgs boson - popularly known now as the "God particle". So named not because it could resolve the Augustinian Dilemma, but perhaps as in, "Oh God, when are we going to find it?". More seriously, the Higgs boson could account for the mass properties of the other entities - why some have it, and some don't. So if particle physicists observe the Higgs boson, they can effectively draw a line under 50 years or so research, slap themselves on the back, and move on.

Unfortunately, the Higgs boson has spent over 40 years hiding - ironically not because it is tiny. The Standard Model unfortunately does not predict its mass. As efforts have concentrated on manufacturing the boson in particle accelerators, its continuing elusiveness has been put down to it being big - a tad too big.

Hence the LHC, which crudely speaking whizzes bits of matter to as fast a speed as possible. Experimenters let these crash into various targets to see what new interesting bits emerge. The record-breaking energies of the LHC require similarly record-breaking electro-magnets to achieve. 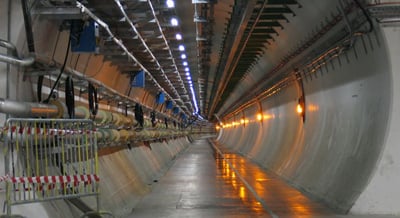 The LHC though may be the last bite at the cherry. There are reasons to think that the creation of Higgs boson will remain elusive - and less likely to appear at collision energies higher than those the LHC is capable of attaining. Should the Higgs boson not be flushed out with the LHC, physicists will find themselves in the awkward position of asking for funds for another, even larger collider, costing more than the £10bn that failed to find the "God Particle" that the politicians had been promised.

Nevertheless, successfully exhibiting the Higgs boson would be a big confidence boost to quantum physics, and would see these guys muscling in on physics at the other end of the size scale - cosmology.

Look beyond the headlines, and questions begin to pile up.

Next page: At warp speed
Page: