Those who follow the robot news will be pleased to hear that recent US military-funded driverless car contest technologies are finding their first real world applications. To be precise, American droid chiefs plan soon to unleash titanic, 600-tonne automated trucks capable of squashing flimsy human vehicles like bugs. 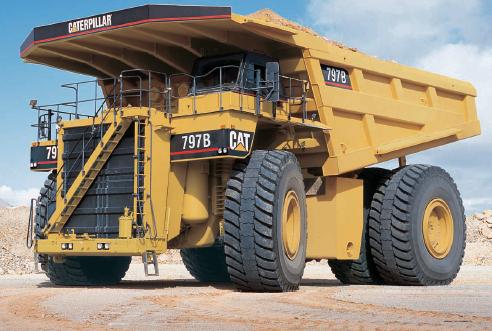 Engine room, this is the bridge. Flank speed

The intention is to add robo-driver mode to Caterpillar's most outrageously enormous trucks, such as the 600-tonnes-all-up 797B model. This brobdingnagian land leviathan is so huge that it features a control deck with railings, reached by a flight of stairs - effectively a bridge like that of a ship - rather than any normal driver's compartment.

Now the colossal machine will throw off fleshy dominance to roam the Earth obedient only to its own digital whims. Caterpillar and the Carnegie-Mellon boffins reckon it will still be content to haul 380-tonne loads of ore and suchlike about the place, asking no more than an occasional few thousand gallons of diesel as recompense.

Only time will tell. However, if in fact the plans turn out well and the enormous trucks remain obedient rather than going rogue to smash a grisly swathe of devastation through human cities, they could fulfil many needs. In particular, the little matter of how on Earth to deliver the refill cartridges for Caterpillar's planned 3D concrete-jet building printers may soon be solved. ®

Optimus Sub-Prime? For something meant to revolutionize production lines, reveal wasn't quite there yet
AI + ML3 Oct 2022 | 89