Senator Joseph Lieberman claims to have struck a mighty blow against the forces of al Qaeda this week by pressuring YouTube to forbid users from uploading terrorist training videos.

The popular video site updated its "Community Guidelines" yesterday, warning terrorist cells they're at serious risk of violating the site's Terms of Service — and may even face having their YouTube accounts permanently terminated.

"YouTube was being used by Islamist terrorist organizations to recruit and train followers via the Internet and to incite terrorist attacks around the world, including right here in the United States, and Google should be commended for recognizing that," Lieberman said in a statement. "I expect these stronger community guidelines to decrease the number of videos on YouTube produced by al Qaeda and affiliated Islamist terrorist organizations." 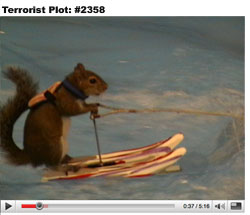 Google makes no mention of Lieberman in its community blog outlining the policy change.

"We've updated the Community Guidelines to address some of the most common questions users ask us about inappropriate content. Included in the update are a few things to steer clear of, like not directly inciting violence or encouraging other users to violate the Terms of Service."

Lieberman writes he is grateful for the response, but continues to urge Google to remove all videos produced by "Foreign Terrorist Organizations", not just those that violate its community guidelines.

Intriguingly, his efforts may have also unintentionally thwarted another subversive group threatening Lady Liberty from the shadows. YouTube's revised policy now forbids "things like instructional bomb making, ninja assassin training, sniper attacks, videos that train terrorists, or tips on illegal street racing. Any depictions like these should be educational or documentary and shouldn’t be designed to help or encourage others to imitate them." [Emphasis is ours.]

No doubt another example of underhanded rider legislation by the pirate lobby group. ®