Ecotricity is backing the "Greenbird" high-speed land yacht team in an attempt to break the record. The plan was to make an attempt on the flat bed of Lake Lefroy in Western Australia this month, but unseasonal rains have put a spanner in the works. 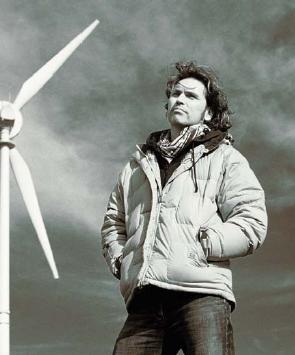 Writing at his blog, zerocarbonista ("Viva the next industrial revolution"!) Vince explains:

This year’s Greenbird land record attempt is a washout. I didn’t even get to Australia... The lake is normally dry in September, but this year it’s wet due to uncharacteristic rain fall... These unusual and changing weather patterns, typical results of the impact of climate change, have scuppered our record attempt... it’s an irony not lost on us while that while Greenbird is intended to show how the world might be getting around when fossil fuels run out - the changes that fossil fuels are causing to our climate right now appears to be the very thing that has stopped us.

In the next twenty years, I firmly believe that wind power will be our main energy source and wind-powered cars will no longer be the stuff of dreams.

He doesn't mean that wheely windjammers like the Greenbird will one day back and fill in the traffic jams of tomorrow. Rather, he proposes relatively conventional electric battery cars, which would charge up from a future UK electricity grid pretty much entirely powered by wind. The Greenbird itself is merely a publicity stunt.

But that's not to say that Vince doesn't have some amazing stuff on offer right now. His main business venture is Ecotricity, which like many other companies will sell you "green" electricity. Unlike those others, however, Ecotricity also says that "for every £1 you spend with us through your electricity bills we spend another £1 building new sources of green electricity... that's not a promise, it's a fact".

Over the last four years we’ve invested on average £460 per customer per year. The typical household bill for electricity in the UK is about £400 – that’s why we say for every pound you spend with us through your electricity bill, we spend a pound building new sources of clean energy.

The company says it had 33,000 customers by January this year. However, "more than 2,300" of these were businesses - for example Ford Motors at Dagenham, which is expected to take 6.7 million kilowatt-hours from Ecotricity annually. This should yield revenues of several hundred thousand pounds at least, from just one client: giving a clue as to how the firm is able to afford £460 of new windmills per customer every year without fail.

Still, at least it's green 'leccy, isn't it?

Well, no, actually, not according to Ecotricity. The company's juice was 24 per cent renewable at the last count, from its own turbines. This is expected to rise to 30. The rest was approximately one-third each from nuclear, coal and gas. The idea is that the profits from the company's main business - that is, selling "brown" electricity at the same retail prices as the major brown-electricity providers, a highly lucrative activity - are ploughed into the wind turbine programme. Well, and a few other things like the Greenbird, directors' pay etc. Details are sketchy - the Ecotricity Group is set up as a maze of different privately-held companies.