Getting it right on the fourth attempt?

This is certainly an eye-catching gimmick, but we didn’t find it particularly useful. We tend to use the shuffle mode to flick through songs quite quickly, whereas the ‘shake to shuffle’ option actually slows you down as you have to keep shaking the Nano from side to side all the time. However, it’s the sort of thing that will look really cool when you try it out in a store showroom, so we wouldn’t be surprised if it helps to swing a few sales this Christmas, especially to parents thinking of buying one for their kids. 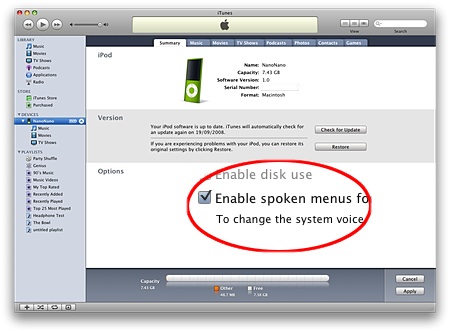 I Speak Your Weight: use iTunes to get the Nano to read out menus
Click for full-size image

As an aside, games developers have been using the accelerometer in the iPhone and iPod Touch to produce games that can be controlled by tilting the device from side to side. Most of the games available for the Nano are quite simple ones controlled with the scrollwheel, so it'll be interesting to see if some of those iPhone games start to appear on the Nano too.

In addition to these changes to the hardware design, Apple has also included a few new software features that help to improve the iPod’s ease of use. There’s an option to increase the typeface size for menu text in order to improve legibility, and for people with more seriously impaired vision there’s a new feature called Spoken Word Menus.

As you scroll through the various menu options, the Nano is now able to speak aloud the names of each menu item, such as Albums, Artists and Songs, as well as telling you the name of each song and the artist - though it did have a bit of trouble with ‘Kylie Minogue’, who was on our iPod purely in the interests of research.

In order to use this feature, you first have to connect the Nano to your computer and then activate the Spoken Word Menus option in iTunes – a point that's foolishly omitted from the skimpy Getting Started leaflet supplied with the iPod. When you do this, iTunes uses the ‘text to speech’ capabilities that are built into both the Mac and Windows operating systems to generate a series of audio files containing the spoken menu titles and track information and then downloads these onto the iPod. This process takes a little time – about 2.5 minutes when we put 1000 songs onto our 8GB Nano – as well as a little bit of the iPod’s disk space. However, the spoken menu files for those 1000 songs only took up an additional 45MB, so this isn’t going to eat into the iPod’s storage capacity too much.