(Show your US ID card at the door)

The site says it's added more than 6,000 feature films and TV shows courtesy of CBS, Hulu.com, Sony Pictures Television and about 500 independent filmmakers. Unfortunately, licensing issues are to blame for the service only being offered stateside.

IMDb's new streaming vids are offered gratis, with commercial interruptions and media player banner ads pushing revenue and fronting the bandwidth bill. Amazon also hopes to coax potential customers into clicking the Amazon Video on Demand button to rent or purchase the content, or even buy the DVD on Amazon.com. 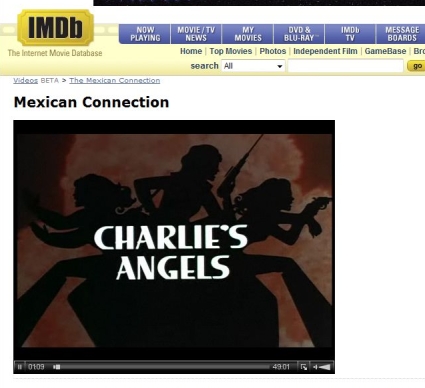 The IMDb player: not very flashy. Ha! You see, because it runs on...

After a few minutes of viewing, its apparent the video quality isn't tops. Even content originating (and available) on Hulu seems downscaled for IMDb. All the more reason to purchase the video rather than catch a cheap stream. That's probably what Amazon is going for.

Operators of IMDb have a less commercial spin on the affair. It's a bit...ambitious, not that there's anything wrong with it.

"Our goal is to show our users every movie and TV show on the Internet for Free on IMDB.com," Col Needham, founder and directing manager of the site said in a statement.

Hopefully not all at once. But a quick jaunt through the darker recesses of this reporter's mind illustrates they still have a way to go: 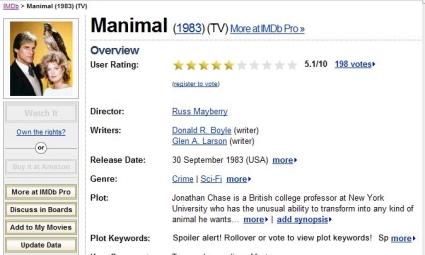 No Manimal video or purchase link? That kind of oversight deserves two tsks: Tsk and tsk. ®