Pope watched over by flying robots during Lourdes visit

All good Catholics are well aware that the Pope walks this sinful Earth safe in the knowledge that he has robust heavenly backup. More literal-minded believers might contend that such support, in the event of any worldly dispute turning ugly, could easily include unsleeping winged guardians that do not age or die as mortals do.

This has now been confirmed to be absolutely true on occasion, with the news that the Holy Father was watched over by an unmanned air vehicle (UAV) - a winged flying robot - during a recent visit to Lourdes. 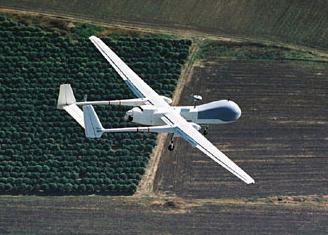 Pope Benedict XVI reportedly told the assembled faithful at the shrine that people must accept death "at the hour chosen by God".

It was clear, however, that the temporal overlords of France would not be above jogging His elbow a little in the event of any disrespect being offered to Christ's Earthly vicar on their watch.

Aviation Week reports that Eagle-1 SIDM autonomous surveillance platforms orbited on high above Lourdes, providing what is often profanely referred to in military circles as the "god's eye view" of the surrounding terrain - and the ability to call down terrifying hammerblows of destruction from the skies using laser target-designation systems. Batteries of Crotale air-defence missiles were also on standby in the event of any impious intrusion being mounted into the Supreme Pontiff's heavenly exclusion zone.

Military theology buffs no doubt found material for knotty debate in the fact that the Eagle-1 genuinely comes from the Holy Land, being manufactured by Israel Aircraft Industries. However, the modern French military is avowedly secular rather than seeing itself - as its more prominent members have in the past - as the literal Sword of God.

In the event the papal visit passed off without incident, and the temporal angels of death weren't called upon to do more than watch. ®

* Wilt thou set thine eyes upon that which is not? for riches certainly make themselves wings; they fly away as an eagle toward heaven.