But boys are slower to adopt mobes

A new study of US teenagers puts mobile phones into the hands of 91 per cent of 17-year-old girls, while only 78 per cent of their male compatriots can make a mobile call.

The study comes from MultiMedia Intelligence, working with Experian, and draws on data from interviews, consumer surveys and handset usage databases, involving around 2500 Americans aged between 12 and 17.

According to the companies there are 16 million mobile phone users within that age bracket, but the number isn't going to increase much more despite rising by 12 per cent in 2007. The study predicts that by 2012 there will only be 17 million teenage mobile phone users in the USA, so the market is already approaching saturation point. 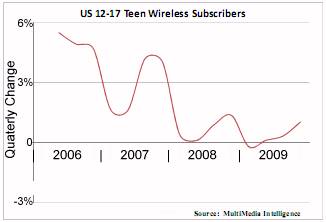 Anyone trying to push more phones into that market will need to know that at age 13 just over half of Americans already have a mobile phone, but that boys tend to go mobile at 13 or at 16, not in between.

The study and accompanying white paper bring out some interesting statistics on growth rates during the year, including a huge dip in January and February, when teenagers who got a phone for Christmas tended to lose interest or run out of money. Multimedia Intelligence also identified a trend for subscribers to drop off the network for extended periods only to reappear as normal - withdrawal of cellular service now being considered a suitable punishment for wayward children.

When it comes to selling mobility to children the US networks still have a lot to learn from Europe - in the UK the average age for owning a mobile is eight. The trick is to stir up public fear then paint the mobile as a safety device and the parents who insist on disconnected children as uncaring, and before you know it every ankle-biter in America will be tied in to a long-term contract. ®