Bill Buxton to change Microsoft from within, hug Steve Ballmer

Remix 08 "Last year at the company meeting Steve Ballmer said quite clearly to 85,000 employees 'If you don’t change and you don’t go in this direction, we’re dead, and I don’t want to die.' I wanted to go hug him when he said that."

So says Bill Buxton, Principal Researcher at Microsoft, interviewed at the company’s Remix 08 conference in Brighton where he gave a keynote. The Mix and Remix conferences are design-focused events, part of Microsoft’s long-standing attempt to reshape its Windows and Web clients as a more designer-friendly platform, based on .NET and the Windows Presentation Foundation (WPF).

Buxton is a well-known designer who joined Microsoft nearly two years ago. His theme is that design is critical to every aspect of computing. He talks about Apple and why the iPod succeeded. "When Steve Jobs was asked how he would turn Apple round he answered with two words," says Buxton. "Industrial design."

Buxton joined Microsoft specifically because of its design failings. "When I joined I’d had recruitment offers from most of the usual suspects. But if you want to be a doctor why would you go to a health spa? Go to a place where you can practice medicine and bring about the change. I’m a child of the sixties, I want to change the world."

What’s his assessment of Microsoft, in respect of the design of its products? Buxton is guarded. "It’s hard to talk about Microsoft in terms of a single company," he says. "With large products like Windows and Office, you’re dealing with such a lot of legacy, not just legacy code but legacy skills from users. With Office 2007, which I had nothing to do with, it was fascinating that the thing they tried to address was design and user interface issues. That’s never happened in Microsoft before.

"Where you see a lot of the change is in parts of the company which are less burdened by legacy. The Zune is an interesting story. I don’t mean it’s an incredible success. It’s in a very tight market, with the dominance of the iPod. The first generation Zune was competent. But the real insight comes if you compare it 9 months later, and you say, how did you come from a standing start to make something of that elegance? I own 4 ipods but I use the Zune and I don’t get them for free.

"Surface [a touch computer] is another thing. It was a work of mine from the 80s and 90s which lay behind much of the technology that evolved and became Surface. I thought Microsoft would not do something like that, and they did. The Xbox is another example. There’s been some hiccups in the technology a year ago, but it’s a good platform." 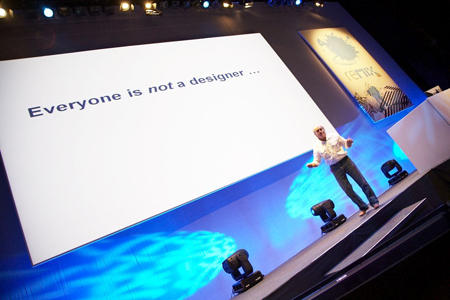 It is all very well talking about Zune and Xbox, but the core of the company is Windows and Office. How does he actually rate the Office 2007 ribbon? "My job is never to be happy with it. Given what they were working from I think it’s on the way," he says. "Am I working with new concepts to push much harder now that we’ve had that start? Absolutely. Am I embarrassed by where we are? No. These are large teams, and cultures and practices don’t change overnight."

Apple has demonstrated the advantage of controlling hardware and software from end to end, whereas Microsoft depends on third-parties. Can Microsoft ever achieve the quality it needs without changing the way it works with its partners?

"If you own the end to end, hardware distribution, marketing, packaging, everything, then you have control of the experience," says Buxton. "In mobile, we don’t make phones, we’re a software company. All these hardware vendors make phones. The hardware vendor tries to impose their brand, and then there’s people who build applications on top. You have these tiers, and when something goes wrong, we get blamed, and we have no control, or very little."

Despite this depressing diagnosis, Buxton claims it is changing, thanks to Apple. "Everybody in that food chain gets it now. Everybody’s motivated to fix it. Thinking about the holistic experience is much easier now than it was two years ago. What you’re going to see with Mobile 7 is going to give evidence of progress."

Surely the same problems apply to PCs? "Consumers are going to vote with their cheque book," says Buxton, agreeing. "We’ve reached a point where consumers, and I mean business customers as well, are not willing to accept stuff that’s sub-standard. The people who integrate systems and so on are going to realise that to stay in business they have to do better, and that’s why you’re seeing this emphasis on design, and not just industrial design, experience design."

According to Buxton, Microsoft’s new design-oriented tools are key. "If we can make it easier and cheaper for the developers to do it well, they will do better," he says, referring to both internal and third-party developers.

Towards the end of his keynote, Buxton shows a slide with the question "Can cultures change?" He does not mention Microsoft, but delegates make the obvious connection. Can Microsoft change? "I get more email from every talk I do internally than from all the talks of I do outside. There’s a desire to change and a thirst for any help to make it happen," he says. Nevertheless, it is a question, not a statement. There is every reason to be sceptical. One thing though is clear: Microsoft knows it has a problem. ®