The li-ion and the lamb

'Leccy Tech Mercedes' first hybrid car looks set to become the first production motor with a lithium-ion battery when it debuts in Europe next summer.

According the German car maker, the S400 BlueHybrid will use lithium-ion rather than the more commonplace nickel-metal hydride (NiMH) battery tech because of its much greater energy density.

In short, a li-ion battery will hold a darn sight more charge in a given space than NiMH will, and that's allowed Mercedes-Benz to tuck the battery into the engine compartment rather than release a car with a more compact cabin or boot.

Lithium-ion is increasingly perceived as the prime battery tech for electric cars, replacing the clunky, chunky power packs used in today's electrics and hybrids to deliver either less weight but reduce battery mileage, or take up the same space as a NiMH unit but provide a greater driving range. 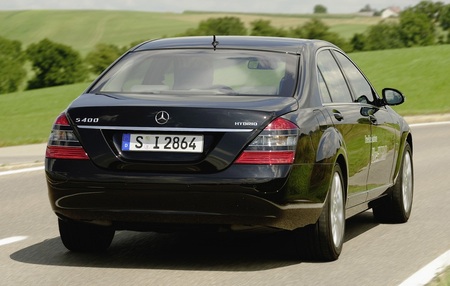 It's the same basic battery chemistry as the power packs found in today's laptops and handhelds.

The S400 BlueHybrid packs in a 3.5l V6 engine capable of producing 279bhp on top of which you can add the the battery-driven electric motor's 20bhp during acceleration. The upshot: 0-60m/h in 7.3s and reduced emissions. 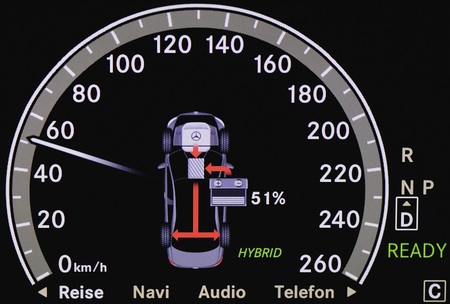 The S400 will release 190g of carbon dioxide per kilometre, compared to the 249g/km the S350 pumps out at the moment.

That said, it's rated at a mere 29 miles per gallon, which is only a gnat's tool more than the S350 achieves.

Definitely a case of 'hybrid lite', though with a summer 2009 release planned, Mercedes hopefully has time to tweak out some better numbers.