A Ukrainian airship visionary based in California has won further US military funding to develop his miraculous "Aeroscraft" sky-leviathan design. However, some question marks remain over the craft's unique - almost miraculous - buoyancy-control technology.

Aeros Aeronautical Systems Corp announced last week that it had been awarded a contract to demonstrate its lightweight rigid aerostructure technology. The money was awarded by DARPA*, the famous Pentagon wackboffinry bureau known for its defiant reliance on the appliance of science to all military problems.

The super-lightweight rigid structure, which Aeros founder Igor Pasternak will now pull out of his hat, will need to be remarkable stuff. The proposed Aeroscraft rigid airship would be strong and stiff enough to handle heavy loads, and to transmit significant forces from attached stub wings, fins, and vectored-thrust props. Pasternak sees the structure as one of the two special sauces which will make his sky-ship project genuinely capable and airworthy, unlike so many others.

But the super-structure kit will be far from the most startling thing about the Aeroscraft, should it ever get built. Pasternak's other proprietary trick - which he calls Control Of Static Heaviness, or COSH - is far more remarkable, and he claims to have cracked that already. If it's true, Pasternak has solved a well-nigh impossible engineering problem that has bedeviled airship designers for almost a century. 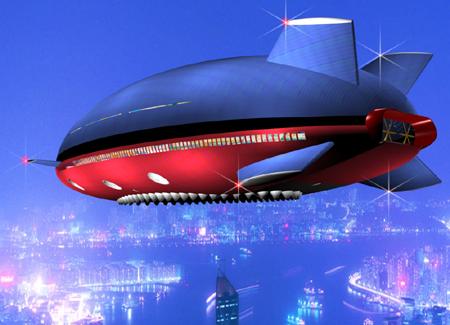 A bagbox of hot (or cold) air. And helium. Pic: AAS

The problem is a relatively simple one: that of controlling buoyancy when losing weight. In order to move about, an airship must burn fuel, so becoming lighter. More seriously, in order to operate, it will often need to drop off cargo or passengers. In either case the ship will become more buoyant and tend to ascend more and more powerfully.

This is bad, because pressure decreases as the ship soars upward, causing the lifting-gas cells inside it to expand. It's normal for part of the ship to hold air at surface level, allowing the ship to reach a decent altitude safely, but enough uncontrolled buoyancy will loft the vessel to "pressure height", where expanding gas cells have driven out all the air and fill the ship completely.

At pressure height, automatic valves open and start venting off lifting gas to prevent the ship bursting. It may be possible to regain control and achieve a safe landing in the end - though not always - but a lot of gas will definitely be gone until the ship can be refilled. This will also be true if the pilot vents gas in advance, so as to prevent a dangerous excursion above pressure height. Either case is unacceptable, as nice safe helium costs far too much to be thrown away whenever cargo is dropped off or fuel burned. Nobody has been willing to use cheap but highly-flammable hydrogen since the Hindenburg disaster.

There are various existing solutions to this problem, but all have their disadvantages. If a ship is delivering people and cargo at a properly-equipped mooring mast, it can take on water ballast through a nose connection at the same time, so remaining neutrally buoyant. Fuel burn while airborne can be dealt with by recovering an equal weight of water from engine exhaust using condensers. These systems were used successfully in the US Navy's 1930s helium airships, USS Akron and Macon.

But one of the main selling-points of an airship in today's world is its ability - potentially - to deliver heavy cargoes to places without established mooring masts and water-ballast supplies. That's certainly a major role seen for them by the US military today, so airship designers need to think of ways to do without such luxuries.

One such method does exist. Airship engines can be run on gaseous fuel which weighs the same as air - "blaugas" - which can be kept in cells within the ship. As the blaugas is burned, it gets replaced by air and the ship's buoyancy is unaffected. This system was used successfully aboard the Graf Zeppelin, a hydrogen ship. But when trying to avoid building a huge thin-skinned balloon full of flammable gas - as in a helium vessel - blaugas is something of a retrograde step.

Another method is the use of vertical thrusters to support the load, with the gas envelope handling only the weight of the ship. This was the idea behind the unsuccessful Piasecki Heli-Stat, now being revived by Boeing under the name "SkyHook". But this is no longer a true airship - more of an airship-helicopter combo. It will have to dump its load to stay airborne if it loses vertical thrust, and it won't have the range and fuel economy offered by a fully-buoyant ship.

But why not simply compress the helium into high-pressure storage tanks when it's not needed?