Review We like the iPod Touch. It's not the only portable device with a touchscreen control system, but the way that Apple has employed the technology is clever.

We can spend hours idly flicking our finger across the screen, watching the pretty album artwork slide back and forth.

And that business of ‘pinching’ your fingers to zoom in and out on photos is nothing short of inspired. It gives the iPod Touch a responsiveness that makes it feel almost organic, rather than just being an inert lump of plastic sitting in the palm of your hand. 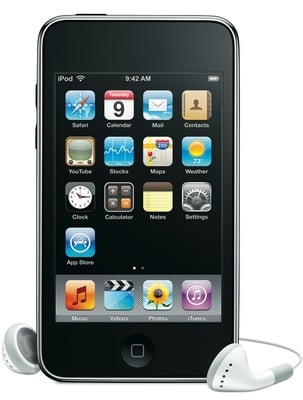 Apple's 2G iPod Touch: cheaper and thinner than before

So we were intrigued by the rumours of an updated iPod Touch that were circulating earlier this month, just prior to Steve Jobs’ unveiling of the new iPod range. In the end, many people were disappointed by what they saw as a relatively minor upgrade. However, reading between the lines, there’s a clear strategic shift going on in the way that Apple markets the iPod Touch, even if the hardware itself hasn’t changed very much.

The most welcome change actually came in the form of price cuts for all three models. Prices for the iPod Touch now start at £169 for the 8GB model, with the 16GB and 32GB models costing £219 and £289, respectively. The iPod Touch is still the most expensive model in the iPod range – and slightly more expensive than rivals such as the Archos 605 – but bringing the 8GB model down from £199 to £169 makes it seem more affordable and less of a luxury item.

It also narrows the price gap between the iPod nano and the iPod Touch, potentially sidelining the once-mighty iPod Classic as a niche product for the relatively small number of people who need the Classic’s much larger 120GB storage capacity.