California Academy of Sciences: A new lease on life

Natural history without the formaldehyde

The grand dame of natural history museums in the American west gave a sneak peak to the press last week, after a multi-year green reconstruction and all-around face lift. The results are impressive: One of the ten largest natural science museums in the world, San Francisco’s California Academy of Sciences has - for the second time since its founding in 1853 - escaped the ruin of a major earthquake and is all the better for it.

Renowned Italian architect Renzo Piano razed much of the building that had been structurally unsound since the last major quake - the Loma Prieta temblor of 1989 - and has replaced it with an airy structure that opens onto the expanse of Golden Gate Park - and, by implication, the world beyond.

From the undulating "living roof" of native plants that conjures the hills of the surrounding landscape to the rain forest within, the revamped Academy focuses on natural history as it plays out before us in an era of globalization, global warming, and mass extinction - forgoing the dinosaur obsession that's the bread and butter of so many natural history museums. 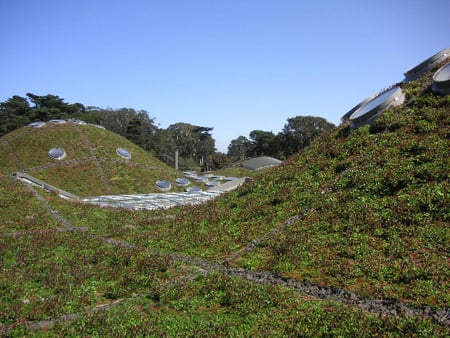 This focus also plays to the Academy’s strengths. The Academy has long had the world’s greatest collection of Galapagos specimens (Darwin was an honorary member) and is renowned in for its work in the fields of ichthyology (the study of fishes), herpetology (reptiles), and entomology (insects) - although it conducts research and field work in a variety of other disciplines.

The Academy consists of its various research arms, a research library, the Morrison Planetarium, the Steinhart Aquarium, and the newly installed four-story "flooded rain forest."

The Academy’s long association with the Galapagos has positioned it well to focus on the evolution of island ecology and corollary threats to the rare and exotic species that have evolved in isolation - and therefore face a particular threat in an era of rapid globalization.

As such, the building seeks to minimize its ecological footprint. The living roof consists of 1.7 million plants native to the San Francisco area that are threatened by invasive species and that function both as a natural form of insulation and a means of water collection. This water may then be used to flush the Academy’s toilets.

The portholes in the living roof above the interior forest provide dappled light for the tropical plants within, and they open and close based on the temperature, controlled by a rooftop weather station. Solar panels fan out from either side of the living roof, and the plaza at the center of the complex is naturally ventilated.

The building opens on all sides to the park beyond to maximize natural light and connect with the larger world - an ontological trope reinforced by the Academy’s focus on the threats posed by globalization to those very species that form the largest part of its sizable collection.

The highlights of the structure are the twenty-five foot Phillipine coral reef and the view from beneath the flooded rain forest. You can see through the waters (piranhas and all), up through the trees, orchids, and other vegetation, to the skylights in the roof. 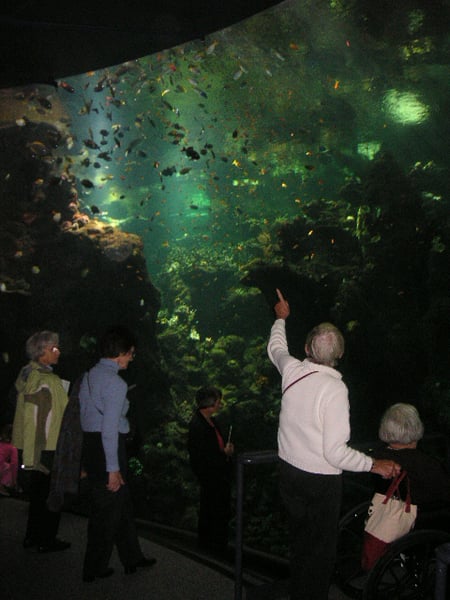 The African diorama, though beautifully maintained, seems oddly out of place, harking back to an era when the Academy was more a pastiche of historical narratives, when each generation would add a wing here or there as it saw fit. The renowned collections of fauna from the Galapagos expeditions and other private acquisition are glimpsed only briefly.

Many museums keep large chunks of their collections in rotation. That may keep people coming back - and there is something offensive to modern sensibilities about rows and rows of formaldehyde-filled specimen jars. Such things are, by and large, out of sight at the new Academy. The focus is on the tropical rain forests and the ocean reefs, which together bank enormous volumes of genetic diversity and allow visitors to appreciate more directly the genetic heritage embalmed in the unseen specimen jars.

Meanwhile, the Morrison planetarium is the world’s largest all-digital planetarium and provides a day-by-day account of developments in astronomy, with a particular focus on potentially life-sustaining planets. Like the rest of the Academy, the focus is really on the future, rather than the past. Let the researchers have their specimen jars. The resurrected Academy has much more on offer. ®