NASA's Mars Rover Opportunity is about to set off on what may be its final odyssey - a seven-mile (11.3 km) jaunt to a crater around 20 times larger than the Victoria Crater from which it extricated itself earlier this month.

The distant feature, dubbed Endeavour, is 13.7 miles (22 km) across and 1,000 ft (300m) deep. It's described by Steve Squyres, principal investigator for the science instruments on Opportunity and twin rover Spirit, as "staggeringly large compared to anything we've seen before". 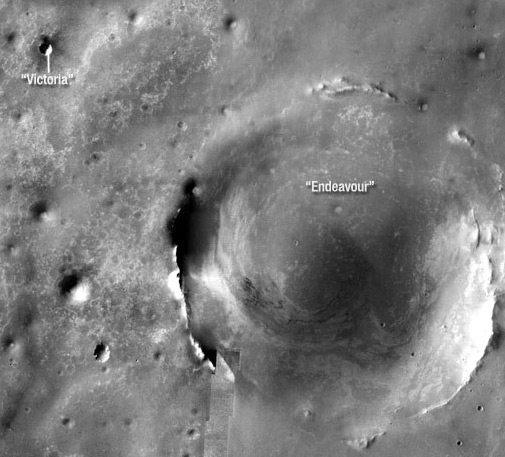 John Callas, the project manager for both Mars rovers, enthused: "This is a bolder, more aggressive objective than we have had before. It's tremendously exciting. It's new science. It's the next great challenge for these robotic explorers."

However, before scientists can catch the view from the ridge, Opportunity must crawl around 110 yards a day - an estimated top speed which would mean it could take two years to reach its destination.

Squyres cautioned: "We may not get there, but it is scientifically the right direction to go anyway."

He added: "But even if we never get there, as we move southward we expect to be getting to younger and younger layers of rock on the surface. Also, there are large craters to the south that we think are sources of cobbles that we want to examine out on the plain. Some of the cobbles are samples of layers deeper than Opportunity will ever see, and we expect to find more cobbles as we head toward the south."

Opportunity does have a couple of advantages it didn't enjoy during its four-mile hike to Victoria in 2005-6: the High Resolution Imaging Science Experiment (HiRISE) camera aboard the Mars Reconnaissance Orbiter; and a new version of "flight software" uploaded to the rover and its twin in 2006.

The former "allows us to identify drive paths and potential hazards on the scale of the rover along the route", Callas explained, while the latter helps the rovers "autonomously choose routes and avoid hazards such as sand dunes".

Opportunity and Spirit landed on Mars back in January 2004, since when they've explored the Red Planet's surface with a resilience which has seen them survive long beyond their expected endurance. ®