Can dictation devices do music?

Review Olympus has quite a pedigree in the compact, tapeless voice recorder market, yet the introduction of the LS-10 Linear PCM is a distinct departure from all this.

While both types of recorder share the ability to easily transfer audio files to computer over USB, the LS-10 takes itself very seriously, proffering uncompressed audio recording at different sample rates and resolutions, up to 96kHz at 24-bit. To emphasise its semi-pro pretensions, two sizeable microphones, 90° apart, stick out of the top like teddybear ears and are channelled through much higher quality analog circuitry than its cheaper voice-oriented siblings. 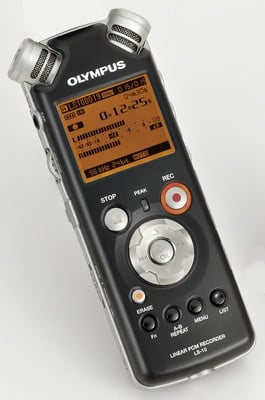 The device itself is roughly the size of a cordless phone, has a metal casing and comes equipped with two foam windshields - mufflers for those ears - a carry case, strap, USB and audio cables, but - surprisingly, considering it’s also an MP3/WMA player - no headphones. Even some cheap, crappy ones would come in handy but, given that underneath the LS-10 there are two tiny, tinny speakers, Olympus, no doubt, assumes this is sufficient for monitoring needs.

Powered by two AA cells lasting up to 16 hours and featuring a 2GB internal memory, the LS-10 can record over 68 hours of audio in low-fi WMA 64Kb/s mode and, at the other end of the spectrum, 96kHz/24-bit WAV which will las a mere 55 minutes. All in stereo, of course, but if there were a mono mode - and why not? - you could double those times again.

All is not lost, though. On the left side of the unit below the earphone jack socket and the volume control is an SDHC card slot, which accommodates capacities from 512MB to 8GB, giving a maximum recording time of around eleven-and-a-half days, which should be enough for most guitar solos.