One day, the asteroids will come

Asteroid impacts on Earth are an unfortunate inevitability. And while devastating impacts are extremely rare in terms of a human lifespan, the destruction they can potentially cause is far greater than more familiar natural disasters.

International efforts have rallied to address threats such as global warming, earthquakes, hurricanes, and the like, but if a 45-meter-wide chunk of rock comes to pay Earth a visit, humanity really doesn't have a cohesive response plan.

The Association of Space Explorers (ASE) wants to correct this potentially world-threatening oversight. The ASE's Committee on Near-Earth Objects (NEOs) and its international Panel on Asteroid Threat Mitigation will today introduce recommendations for global response to the United Nations.

"For the last four and a half billion years, the Earth has been bashed by asteroids orbiting our Sun, and it's time for that to stop," said Russell Schweickart, US Chairman of the ASE-NEO Committee. The group announced the completion of its two-year effort at the Google Foundation offices in San Francisco. 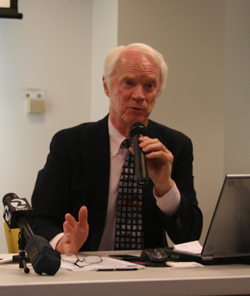 The ASE notes that in the next 10 to 15 years, new telescopes will help discover hundreds of thousands of asteroids that are presently insufficiently detectable. Many of these may have the potential to impact Earth.

If faced with such a threat, humanity now has ways to prevent or limit the damage. The ASE asserts that whether the solution is diverting the object or even evacuation of the impact site — the key to a successful outcome is preparation, planning and timely decision-making.

"Until we have a response in place, we're as vulnerable as the dinosaurs," said Schweickart.

The ASE's report and recommendations - titled "Asteroid Threats: A Call for Global Response" - will be introduced in the 2009 sessions of the UN Committee on the Peaceful Uses of Outer Space. From there, the group hopes to gain input, support, and agreement from the international community before being implemented within the framework of the UN.

First, the group suggests an information, analysis, and warning network be established. The network will use current or new research institutions to analyze NEO orbits to identify potential impacts. It should also establish criteria for issuing NEO impact warnings.

Second, the group recommends a mission planning and operations group that will coordinate the expertise of space-faring nations. The group would assess the current global capability to deflect a hazardous NEO by identifying the required technologies and drawing out potential courses of action. In response to a specific threat, the group would use the plans to prepare a deflection campaign.

Finally, it recommends the UN oversee the first two functions through an inter-government group. That group would also develop policies and guidelines to responding to impact hazards.

Schweickart said the ASE isn't suggesting the UN do the space missions itself. That, of course, would be left in the hands of capable space-faring countries - analogous to the UN's oversight of peacekeeping forces. Nor does preparing for potential NEO threats demand massive funding.

"What we're missing is someone to assume responsibility," he said.

A summary of the ASE's report can be found here (PDF warning). The group plans to release the full report after it's introduced the UN subcommittee in February 2009. ®