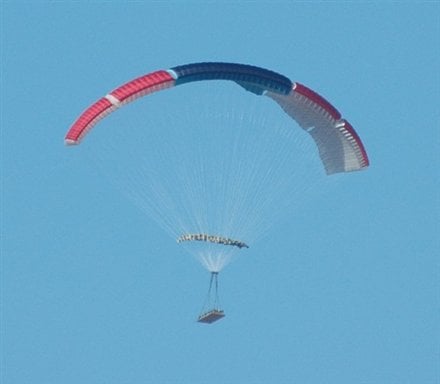 The colossal robo parawing is called GigaFly, and follows on from the firm's earlier MicroFly, FireFly, DragonFly and MegaFly offerings, some of which are used by the US Army for dropping supplies. (There aren't any MilliFly through KiloFly models. Nor any SuperFly, sadly. We checked.)

The record-breaking GigaFly, according to Airborne Systems, is capable of carrying a load of 19 tonnes safely down to land accurately within a few hundred metres of the desired impact point, even when dropped from 22,000 feet up and as far as 13 miles away.

The mighty chute, once deployed, has almost the same wingspan as a jumbo jet. It navigates itself down autonomously using GPS satnav, after it and its load are rolled off the ramp of a military cargo aircraft.

"GigaFly is the largest ram-air ever to be deployed successfully and without the use of pyrotechnics," said Brian Bagdonovich, US Army programme manager.

"What has been accomplished here both technically and physically is remarkable."

The new smart-paradrop technology is important to US forces being supplied by air. If transport planes descend below 10,000 feet they become vulnerable to shoulder-launched anti-aircraft missiles, seen as a common threat in today's counter-insurgency wars. But if they drop supplies from safe heights using unguided chutes, there would be little hope of it landing inside a secure perimeter of reasonable size. Hence the use of smart ram-air parafoils which can glide to where they're wanted.

The British forces have taken a less comprehensive step towards this sort of capability, purchasing "wind sonde" droppable measuring equipment which allows the optimum release point for dumb, unguided parachutes to be calculated. ®