RoTM Our recent shock piece on an attempted incendiary uprising by the TX4-type cab prompted the neoLuddite Resistance Army to place all London cadres on Defcon Laguna.

Well, the reality is worse than we thought. Here's an image caught by an NRA operative last night during a furious firefight in the capital: 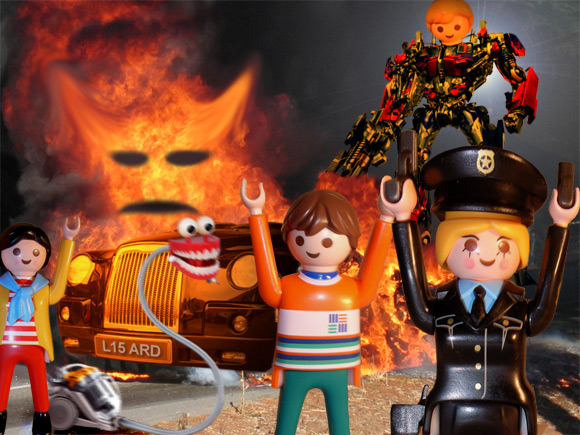 According to the combat report, police and fire services were called to the scene of a spontaneous TX4 combustion incident, only to be ambushed by a hideous Optimus Prime/Boris Johnson hybrid attack cyborg, seen here about to discharge traditional Tory values from his throbbing weapon.

While law enforcement operatives and members of the public quickly took to their heels, the unfortunate cabbie was savaged by a Cyberdyson - a Lizard Alliance vortex killing machine which, as you can see, moves with terrifying speed to dispatch its victims.

Our NRA comrade has been taken to the Montana bunker complex for debriefing, while our photo interpretation unit is probing the image in the hope we can pinpoint exploitable weaknesses in the Johnson cyborg. Its preliminary findings suggest the creature may be vulnerable to a robust kick in the ballot box. More follows... ®