Smaller modules for netbooks, too

Toshiba has taken the wraps off a 256GB solid-state drive, though the unit's not set to become widely available until Q4.

The 256GB unit follows the laptop-friendly 2.5in form-factor and is based on the multi-level cell (MLC) Flash design. 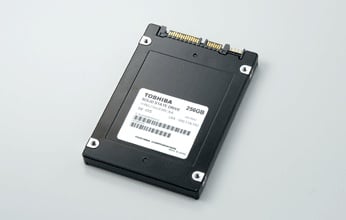 Toshiba claimed the drive delivers a maximum read speed of 120MB/s and maximum write speed of 70MB/s over its 3Gb/s SATA interface.

Joining the THNS256GE8BC in mass-production in Q4 are a trio of 50 x 30mm modules aimed at Small, Cheap Computers. They'll be available in 8, 16 and 32GB capacities and again use 3Gb/s SATA as the linkage technology. Toshiba said their maximum read and writes speeds were, respectively, 80MB/s and 50MB/s.

Toshiba did not say how much it plans to charge for all of these items.

Wanted that Windows 10 update but have an Intel SSD? Computer says no