BT has blamed Brits' poor broadband speeds on tellies, lights and electrical wiring and the interference they all cause.

All this noise gets in the way of broadband signals pinging around homes' phone extension wiring, the telco claimed. The interference is picked up by the bell wire, a third cable which runs alongside the pair of wires that carries the telephony and broadband signal. The greater the number of telephone extension sockets and the more electrical equipment in a home, the greater the problem can be, BT said.

Its solution: filter it out. To that end, it's offering I-Plate, a plug in filter that clips onto a BT NTE 5 master socket. The company estimates that 9m homes have these, and they'll be able to acquire the filters from their broadband providers, to whom BT will be shipping I-Plates from today. The I-Plate isolates the bell wire. 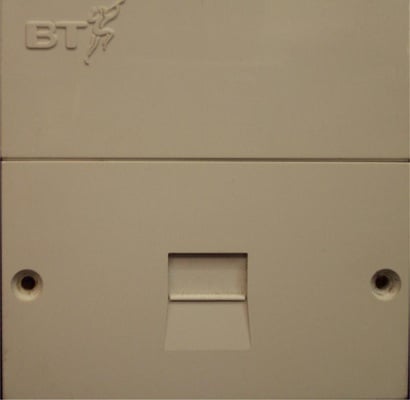 To fit one, unscrew the face plate, clip the I-Plate in place in the socket and replace the cover. No need to call out an engineer, the telco said.

Does it make a difference? We await independent tests, but the provider claims, based on "a benchmark survey of  36,000 lines" that it's carried out since first introducing the technology back in March this year, that users could see an increase of up to 1.5Mb/s, with some particularly lucky punters getting an increase of up to 4Mb/s.

The caveat is that the speed boost - if any - is all entirely dependent on your electrical conditions: what kit you have running, what broadband package you have, your provider and so on.

If your broadband isn't piped over ADSL, you're out of the loop anyway.

BT also claimed the I-Plate may allow homes that have thus far been considered too far from an exchange to receive broadband to now be able to get it.