Ideal for seeing off local Vandals. Or Goths

Some may doubt the practical value of the typical item offered for sale at famed online megajumblemall eBay. This viewpoint will be either reinforced or shattered to rubble by the news that a full size, potentially serviceable piece of Roman siege artillery has now appeared for auction. 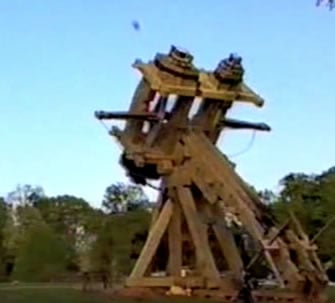 'At my signal, unleash Hell.'

The mighty ballista is offered for sale by custom timber housebuilders Carpenter Oak & Woodland, who built it for a joint BBC/Discovery Channel documentary in 2002. According to the makers, the machine successfully hurled a stone ball of unspecified size to a range of 127 yards, but knackered itself after just two shots. However, they are quite willing to restore it to working order if the buyer requires.

The ballista, as connoisseurs of ancient siege weapons will be well aware, was based on quite advanced technology which the Romans originally lifted from the Greeks. It functions in many ways like a giant crossbow, though it was often used to shoot stone projectiles rather than spearlike bolts.

The particular special sauce of the ballista, as opposed to ordinary bows using bent wood or metal to store energy - or later trebuchets using falling counterweights - was its torsion springs. In the original Roman weapon these were made from ox sinews, and were said to give the weapon excellent performance - perhaps as much as 400 yards' range against large targets.

Carpenter Oak & Woodland apparently couldn't get hold of any ox sinew, and had to use shoddy modern trash instead:

It’s tempting to think that, because the Romans did not have access to modern materials, the ballista could be improved upon. But the Roman’s choice of materials proved impossible to match – for instance, the throwing ropes were made of animal sinew. Modern ropes – even high-tech materials – proved to be far less effective – and of course the team rebuilding the ballista had to ‘make do’ with these newer ropes.

Apart from inferior torsion springs, there are a few practical issues for the potential proud ballista owner to deal with. According to Carpenter Oak & Woodland:

"Clearly, this isn't something that we're going to send by post or courier," says Andy Parker of CO&W.

"Unless you have a big team of lifters and a massive articulated truck then you won't get it very far. That's why we are also offering restoration, delivery and assembly."

Those lusting to get their hands on the bleeding edge of classical siege ordnance and cry havoc like the legionaries of old can slap in an offer here. Be warned, though, the starting bid is £25,000. ®

€1.7bn Estonian company is first on store to have a global presence