American weaponry colossus Northrop Grumman says it has delivered the first production-line solid state energy weapon to the US Air Force. However, the "Vesta II" raygun module doesn't have enough power to meet US military goals for combat applications. 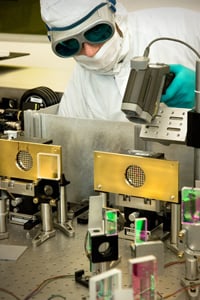 At the Northrop raygun test range.

Vesta II is described by the company as an "add-on" to the Pentagon's Joint High Power Solid State Laser (JHPSSL) programme, which is intended to produce a weapons grade 100 kilowatt blaster cannon powered by electricity. At present, the only way to produce laser beams with this kind of burn is the use of hazardous chemical fuels.

Northrop are confident that they will roll out a full-strength JHPSSL raygun soon, but in the meantime they have supplied the air force with a small consolation prize in the form of the 15 kW Vesta II unit. Depending on beam focus, this lower power level might suffice against easy targets such as cellphone towers, car engines, unexploded munitions or what have you.

"We have taken a very large step toward making solid state laser weapons more rugged and easier to field."

The Vesta, described by Northrop as "a laser weapon that utilizes push-buttons for easy operation", has been delivered to the air force research laboratory's Directed Energy Directorate (DED) raygun shop. The US forces reckon that future combat rayguns will be used to shoot down incoming artillery shells or missiles, or perhaps to pick off small ground targets very precisely from the air. ®