Wet doesn't have to mean slow any more

Say what you like about the US military's technology planners, they don't flinch from a challenge. The latest ploy out of the American warboffinry machine is nothing less than an aircraft which can fly underwater.

The upcoming aerosubmarine plan was announced on Friday, under the rather uninspiring name "Submersible Aircraft". The idea, few regular readers will be surprised to hear, comes from DARPA* - the Pentagon wingnut-tech bureau, which is plainly looking to take the concept of flying below the radar literally to a whole new level. 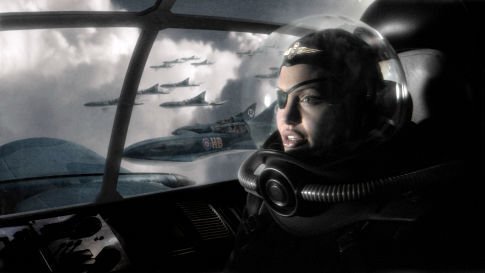 The DARPA bigwigs are fairly clear what they want:

The planned aerohydroplane is evidently intended to insert teams of amphibiously-inclined US Special Forces operators close in to hostile coasts, allowing them to swim ashore without the enemy being aware of their presence.

This can already be done by deploying teams in minisubs from nuclear-powered sub motherships, but it can take quite a long time to get such a team in place. On the other hand, a fast-responding group arriving by parachute could expect to be detected by any target nation possessing radar.

DARPA want the aerosubcraft to be able to fly a minimum of 1000 nautical miles in normal aeroplane style, then descend almost to the wave tops and travel a further 100 miles below the enemy radar horizon in "flight near the surface of the water which may or may not leverage the ground effect".

Then, as the air/sea ship approaches line-of-sight to the enemy coast, it must plunge beneath the waves and achieve a further 12 miles submerged. The craft must be able to do the whole fly-skim-swim trip in eight hours. The eight passengers - one "boat crew" of Navy SEALs, presumably - can then get their black rubber on and do their thing, whatever it may be.

Meanwhile, the aerosub must be able to lurk offshore for up to three days in moderately rough seas - though it is allowed to surface for this bit - before heading back in underwater to retrieve the SEALs. Then it must get back to base the way it came in, all without refuelling.

As to depth, DARPA only want enough to be stealthy. No actual depth figure is set. The Pentagon notioneers emphasise that this is a submerging aircraft, not a flying U-boat:

While it is hard to envision a propulsion system that could ever get a craft with the weight of a submarine airborne, it may be possible to submerge an extremely buoyant platform like an aircraft if the operating depths can be minimized... DARPA has analyzed the design space and relevant technologies and believes that by focusing the design on submerging an aircraft at shallow depths for a short period of time, a tractable solution to the submersible aircraft challenge problem might be possible.

The idea isn't quite as far-fetched as it seems. Shallow depth would allow designers to dispense with a heavy pressure hull and keep the cabin at ambient pressure underwater; there are already relatively lightweight pleasure submarines like this, made of fibreglass or reinforced epoxy resin. The propulsion would be a big challenge - but it might be possible to get the submerged 12 miles from a reasonably sized battery pack, rechargeable using a snorkel by the flight-mode engines.

Whether that makes the real world a better place or not is, as ever, a matter of perspective. ®

*The Defense Advanced Research Projects Agency. Hey - it's the colonials' mad-professor bureau, they can spell it their way.