Sun Microsystems has lost a key individual responsible for getting its aspiring open-source software included in leading Linux distributions.

Barton George has quit Sun after 13 years, hard on the heels of having helped secure the inclusion of an open-source friendly version of Sun's Java Development Kit (JDK) - OpenJDK - with major GNU/Linux distros. 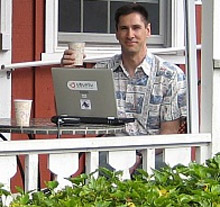 George: a different blend of Java

Having open-source-friendly versions of Java and Sun's middleware ship with Linux has been a major plank in Sun's software strategy for the last few years. The company wants Java and its middleware to piggyback with Linux, to support the market, and ultimately to be able to charge for services related to its software down the line.

As group manager for Sun's GNU/Linux strategy, George liaised with individuals on the distros and co-ordinated Sun’s internal engineering work packaging the company’s NetBeans, Glassfish, and JavaDB in addition to OpenJDK with distros.

George, who set up Sun's manufacturing operations in Brazil soon after joining, has left the company to become senior director of marketing at business-process management specialist Lombardi Software.

George told The Reg he liked Lombardi's smaller company culture and the fact it's based in the town where he lives, Austin, Texas. His departure comes, though, as Sun lays off between 1,500 and 2,500 employees.

Sun told us vice president of developer and community marketing - and Debian founder - Ian Murdock is taking over the relationships George managed. A Sun spokeswoman described Sun's relationships with the Linux community as "a major priority". ®