The 13.3in MacBook has the same look and basic specs as the 15.4in MacBook Pro, also announced today. 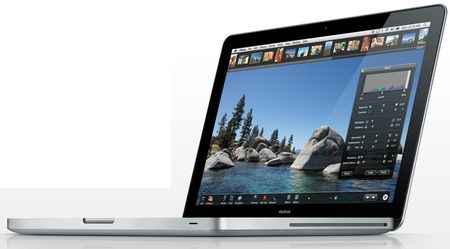 As expected, there are two models: one with a 2GHz Core 2 Duo CPU with 3MB of L2 and 160GB hard drive. The second bumps the processor to 2.4GHz, ups the HDD to a 250GB model and adds - clearly a luxury item, this - a backlit keyboard, which really should be standard across the line.

Why? We've seen more people go 'wow' over MacBook Pro and Air backlit keyboards than any other Mac feature - it's a great marketing tool, and Apple's not using it as effectively as it could.

Apple described DVI, dual-DVI and VGA adaptors as optional accessories, so they're definitely no longer in the box.

Not keen on the new look? Apple also updated its old-style white MacBook with a faster processor today, too, for $999/£719.