The back of the SX110 has been tidied when compared with the SX100, which had a layout that was a bit of a dog’s dinner, with buttons all over the place. Now, the LCD occupies the left-hand side, while on the right are all the controls, including a combined control dial/selector - with a quick selection mode for features such as macro, flash and ISO setting - and various buttons for functions such as playback, display, menu and exposure compensation.

There's a tiny flap on the right side of the camera that covers a mini USB port. On the left is another cover, this time for a lithium button battery that keeps the clock going when you swap out the main batteries. Underneath the camera is a slot for the batteries and SD card. Whoever designed this compartment should be sent to bed with no supper, because it’s a swine to open, a process that involves pushing a tiny recessed button to the right and then forwards. 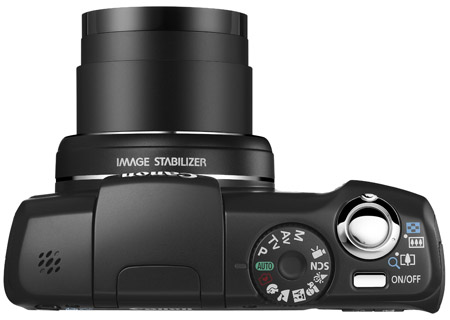 A rather chunky camera

The IS moniker tells you that the SX110 has an optical image stabilisation system, not to mention a nine-point autofocus system with face-detection technology, which includes a face select-and-track function - the SX110 can follow a face within the frame, says Canon - and something that the company snappily calls iSAPS (Intelligent Scene Analysis based on Photographic Space), which automatically optimises the camera settings for a specific scene based on a built-in library of photographic data.

Whatever next? A camera with a built-in library of shots so you don’t even have to bother pressing the shutter? Anyway, all this number crunching is powered by Canon's DIGIC III image processor.

Other features include image resolution ranging from 3456 x 2592 pixels down to VGA, taking in a 3456 x 1944 widescreen mode on the way. There's a directly selectable ISO range of 80-1600, rising to 3200 if you use the right setting in the scene mode menu. The shutter speed range runs from 15s to 1/2500s, and there's a whole clutch of shooting modes including, Easy (even fewer user options than Auto), Auto, Manual, shutter priority, aperture priority and Movie – the SX110 can shoot in three modes, including VGA-quality at 30f/s.