An iPhone app developer is suing the Molson Coors Brewing company for over $12.5m in damages for allegedly copying his $3 novelty beer-pouring application and offering it on iTunes for free.

Steve Sheraton, operator of Nevada-based Hottrix, claims the idea for his iBeer app was illegitimately lifted by the brewing conglomerate and used to advertise its Carling brand of beer.

Hottrix's iBeer app uses the iPhone's accelerometer to simulate a frothy glass of beer being poured when the device is tilted. It's designed to look like the user is drinking a beer, without the hassle of actually consuming a delicious and refreshing beverage.

Sheraton's first version of iBeer was essentially a video of pouring beer made for jailbroken iPhones and the Palm Pilot. He registered a US copyright for "iBeer Video" in May 2008.

The lawsuit claims Sheraton was first contacted by Coors' UK advertising agency to license his iBeer 1.0 software, but after being rejected, it nevertheless used Sweden's Illusion Labs to create a near-identical app called iPint. 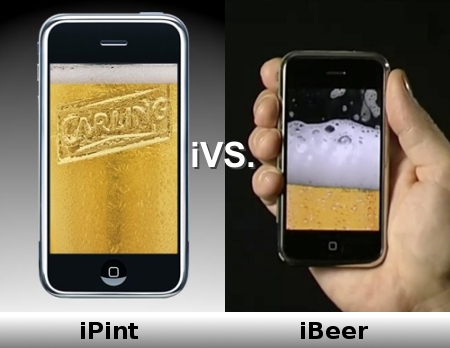 Both iPint and newly-interactive iBeer 2.0 were offered at the iTunes store when it was first opened to developers in July. But not only was iPint offered gratis on iTunes (contrary to iBeer's $3 price tag), but it also included small, optional game where the user navigates a beer sliding down a bar while avoiding obstacles. Shereton claims the addition was made to "create a false distinction between the Infringing App and the iBeer Content."

That July, Hottrix sent a cease and desist letter to the makers of iPint. The app was shortly removed from iTunes for US users, but remains available in most other countries.

Sheraton claims iPint has since enjoyed over 6,000,000 downloads worldwide, all of which "significantly impair the downloading of the iBeer Content." He's asking California's Central District Court to award damages in excess of $12,540,000 for lost profits, alternative statutory damages plus interest, or alternative restitution, "whichever is higher."

The story comes by way of Wired. A copy of the lawsuit is available here (PDF). ®