Asus' iMac-alike all-in-one touchscreen-equipped desktop Eee PC is due to arrive in the UK toward the end of November, local retail sites reckon.

The new desktop, which comes under the ungainly model number ETP1602-WT-X0010, is Asus' biggest screen Eee PC yet: it's got a 16:10-ratio, 15.6in touch-sensitive panel, though at this stage the display's resolution remains uncertain. 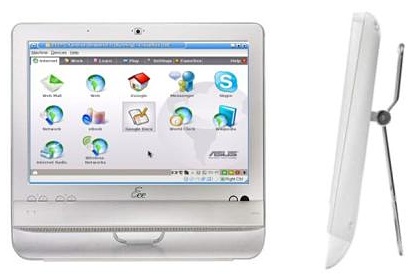 Behind the screen sit all the usual Small, Cheap Computer components: 1.6GHz Atom CPU, Intel 945GSE integrated chipset and 1GB of 667MHz DDR memory. This model comes with a 160GB 3Gb/s SATA hard drive on which Windows XP is pre-installed.

The Eee has on-board 802.11n Wi-FI and Gigabit Ethernet. there are six USB ports - two on the side, four at the back - audio socketry and a multi-format memory card reader. Despite the touchscreen, the Eee comes with a mouse. A keyboard is bundled too.

How much will it set you back? Play.com, for one, wants £400. It's taking orders now, but the new Eee isn't due to ship, the retailer says, until 20 November.