No radio broadcasts from neutron star

NASA's Fermi Gamma-ray Space Telescope (formerly known as GLAST) has spied the first "gamma ray-only" pulsar - a 10,000 year-old stellar remnant which uniquely doesn't appear to emit pulses at either radio, visible light or X-ray wavelengths in common with the 1,800 or so similar objects catalogued to date. 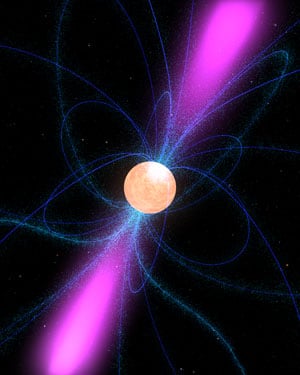 The pulsar - a rapidly-spinning neutron star comprising the "crushed core" of an exploded massive sun - lies in the constellation Cepheus, at a distance of 4,600 light years. The body's "lighthouse-like" beam is formed by a combination of its rotation and "intense magnetic fields" which cause charged particles to "stream outward from the star's magnetic poles at nearly the speed of light to create the gamma-ray beams" (see pic - particle streams in blue, gamma ray beams in purple).

The observations by Fermi's Large Area Telescope (LAT) has picked up "about one gamma ray every minute from CTA 1", providing enough data for scientists to "piece together the neutron star's pulsing behavior, its rotation period, and the rate at which it is slowing down".

The calculations show that the pulsar has a rotation period of 316.86 milliseconds. This will increase by one second every 87,000 years, the boffins predict, since the beams it emits are powered by its rotation and gradually put the brakes on its energetic spinning.

Furthermore, NASA notes that the pulsar is not at the centre of the expanding gaseous shell which is another by-product of a supernova explosion. This is because the blast was asymetric and, based on the pulsar's age and its distance from the supernova origin, scientists have deduced that it's travelling at "about a million miles per hour" - described as "average" by the agency.

Peter Michelson, principal investigator for Fermi's Large Area Telescope, described the significance of the find thus: "This is the first example of a new class of pulsars that will give us fundamental insights into how these collapsed stars work."

He added: "This observation shows the power of the Large Area Telescope. It is so sensitive that we can now discover new types of objects just by observing their gamma-ray emissions."

However, while NASA is trumpeting the singularity of its new find, Fermi team member Alice Harding noted that it isn't necessarily a gamma-ray-only object. She said: "We think the region that emits the pulsed gamma rays is broader than that responsible for pulses of lower-energy radiation. The radio beam probably never swings toward Earth, so we never see it. But the wider gamma-ray beam does sweep our way."

Fermi was launched back in June. Its mission goals are: "To understand the mechanisms of particle acceleration in active galactic nuclei (AGNs), neutron stars, and supernova remnants (SNRs); to resolve the gamma-ray sky: characterize unidentified sources and diffuse emission; to determine the high-energy behavior of gamma-ray bursts and variable sources; and to probe dark matter and the early universe."