Special Report Want to run Mac OS X on a PC? Perhaps you don't want to pay the premium for Apple's hardware - or Apple doesn't make the kind of computer you need, such as a netbook. Because of its native roots in Motorola and PowerPC code, this has traditionally required instruction level emulation. Two things have changed. Apple based Mac OS X on NeXT code, which could run on Intel. And since 2006 Apple has been making Intel PCs. In theory, installing Mac OS X on a PC is much easier. How do you go about it?

The version of Leopard sold by Apple includes drivers for Apple provided hardware only. It also requires an Apple Extensible Firmware Interface (EFI), which replaces the traditional PC BIOS. The Kalyway DVD is a hacked version of OS X that removes the EFI requirement and includes a variety of device drivers for common PC hardware.

Should you try this? As a minimum, I'd recommend the following: You are comfortable editing BIOS settings and knowing the details of your hardware and chipsets. You're not afraid of the Unix command line (not a definite requirement, but many of the troubleshooting guides out there mention it, so you'll probably have to use it at some point). And probably the most important: You have a lot of time.

Before trying this upgrade, you'll need to do some prep work.

Since the installer will be overwriting the disk's Master Boot Record, any other OS present won't boot unless you restore the previous MBR. By far the easiest way around this problem is to use a separate drive for OS X.

In my case, I'm installing on a new system with two disk drives, so I unplugged the Slackware/Windows drive and plugged the second drive in the primary SATA slot on the motherboard.

If all this talk of partitioning, MBRs and switching drive cables scares you, best to stop now. It gets a lot worse.

Now that the preliminaries are out of the way, it's time to install the OS. Boot the PC with the Kalyway DVD in the drive. 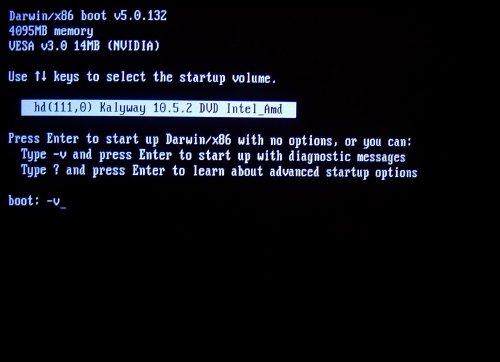 Press F8 when it says to, and turn on verbose mode by entering the startup option "-v" after "boot"