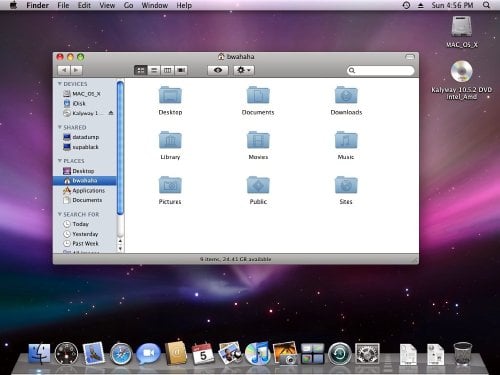 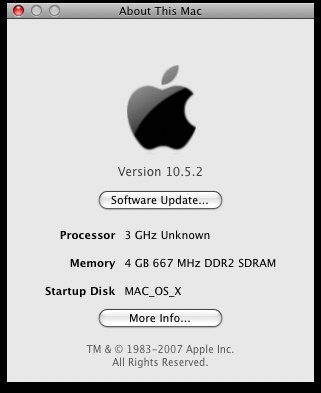 The proof is in the About This Mac dialog box

So at the end, I've left with a more-or-less fuctional Mac OS x install. Everything except USB worked. I didn't run any benchmarks, but under casual use performance is comparable to XP or Linux. Then again, this is an AMD dual core 3000 Mhz SATA box with a reasonably fast video card, so it should be fast under any OS.

Apple won't officially support your new Hackintosh, but what about system patches? Intel owners can download the latest Apple Combo Update and try their luck, subject to some caveats, but I couldn't find any usable update path for AMD-based systems. After trying the Combo Update, my system locked up before the mandatory reboot and hung on the Mac OS loading screen every time it tried to boot. I spent several hours booting from the install disk and trying to fix it, but this proved fruitless (pun not intended). Another reinstall resulted in a bootable system, but this time the sound didn't work, despite my using the settings written down from the previous install. This could be human error, or the results of some installer or driver instability. By this point I was out of patience for OS reinstalls and called it quits.

This experience reminds me of computing back in the early 1990s - the DOS/Windows 3.x days. We spent endless hours loading device drivers, fiddling around with IRQs and addresses, and trying to optimize free memory under 640K. In the early 2000s, Linux was as big a pain to get to a usable point.

Installing OS X brings back similar memories. The difference is that in the past we had no choice; that sort of effort was the price of entry into personal computing. Modern computer users have plenty of good choices available. If you want a proprietary OS that supports your hardware, XP or Vista will do the job. If you want an Open Source OS, there are many flavors of Linux and BSD available. Any of these OSs will take far less time to install and provide better hardware support than a pirated, hacked version of OS X.

If you miss the good old days when installing an OS took real effort, or you're an Apple fan who can't afford a Mac, or if you're just intensely curious and have plenty of free time, installing Mac OS X on a standard PC is a good project for you. The rest of us are better off sticking to Linux or Windows.

If you really want the Mac experience, then buy a Mac. ®

Don't mind us, we'll just have a quick look for unsupported installs and then disappear, we pwoooomise
Software3 Feb 2023 | 34