Amazon.com customers are once again accusing the online retailer of removing video game reviews that criticize the use of SecuROM Digital Rights Management (DRM).

The site says unfavorable reviews aren't being censored, claiming they have accidentally been removed due to a "technical glitch" in automated filtering.

Electronic Arts expansion to the game Crysis, called Crysis Warhead, has recently been hammered in Amazon's customer review section in protest of its use of the maligned SecuROM copy protection. A vast majority of reviews (at publication, 78%) give the game a 1-star rating. A good many forgo an actual critique of the game itself in favor of simply deriding the DRM.

A similar (and more widely reported) negative reception was given to EA's Spore for the very same reason. Many have compared SecuROM's function to malware because it's often installed without the customer's knowledge and continues to monitor the PC even after the game is un-installed.

Soon after Spore accumulated a hefty sum of customer complaints, some cried foul when Amazon's UK store appeared to have yanked hundreds of customer reviews. They claimed the site was censoring negative reviews in order to help encourage sales.

At the time, an Amazon representative told El Reg the site was "encountering technical difficulties which are preventing some customer reviews from appearing on product detail pages."

But the situation seems a bit more suspicious when the exact same thing happened to Crysis Warhead over at the US site.

Here's some fun with Google cache. The following screenshot clips are from the game's Amazon page circa October 16: 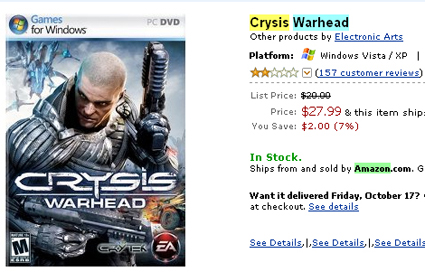 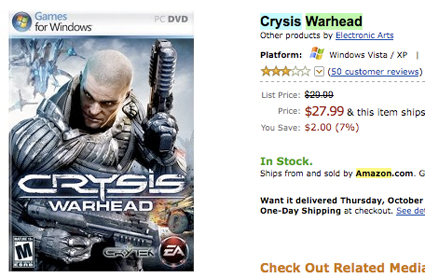 Questionable, yes? Note which rating category most reviews were deleted from.

With a great "ah ha!" we return to our Amazon spokeswoman.

"It turns out that similar to the Spore incident, some customer reviews were accidentally removed from the Crysis detail page because of a technical glitch," she responded. "Amazon did not knowingly or consciously choose to remove the reviews. The team is working on resolving this issue now and restoring all the reviews on the site."

That still seemed suspect. Upon further pressing, she elaborated a bit.

"I can't get into the specifics, but there are some safeguards to try and ensure that customer reviews fall within Amazon's customer review guidelines. Sometimes those safeguards pick up on content that seems questionable and removes it."

Amazon's guidelines doesn't seem to have anything barring DRM criticism, other than requesting reviews focus on specific features of the product.

But evidently, something in Amazon's system is flagging waves of 1-star reviews as a violation. As of publication, the site has restored the missing customer reviews. The game presently resides at a one-and-a-half-star average rating with 204 reviews.

A flood of negative review certainly could be the sort of thing that makes Amazon's system blink. One would think, however, there would be some human eyes involved in the process before over 100 reviews are deleted. Either way, it's fortunate some vigilant customers are out there keeping the site honest. ®