"Forget the whips and chains: it's actually a lot more serious than that". This was the view of Consenting Adult Action Network Spokesperson and disability activist Clair Lewis, as she joined fashion photographer Ben Westwood and a bevy of bound and gagged models in a demonstration against what they believe to be the latest government witch-hunt. 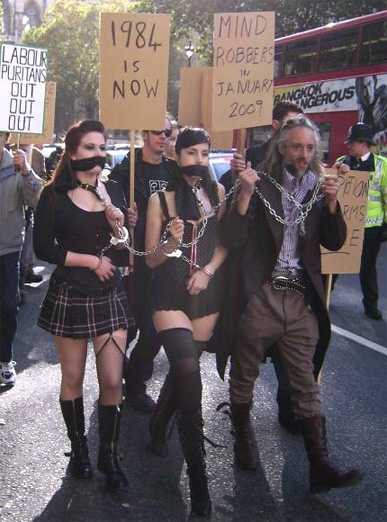 You have nothing to lose but your chains

"The result of these two measures taken together is that individuals are feeling scared, angry and under pressure. We do not believe government reassurances about our sexuality. We think they are as bigoted about kinkiness as previous governments were about homosexuality."

There was no intention to attack conduct, so long as it was legal and did not cause harm to the individuals participating in it.

They were rather less forthcoming on the issue of why the UK had adopted this route as a means to protect us all from "Dangerous Pictures". Governments across the world have looked at the issue and, according to CAAN, most are now looking into some form of filtering or blocking. Their spokesperson added: "The UK government is the only one to have turned this into a direct attack on individuals."

Insistence that everything's just fine also come from the Department for Children, Schools and Families. A spokesperson added: "Safeguarding children is top priority for this Government and the child has been put at the heart of our reforms and we are determined to maintain a relentless focus on children’s safety."

The law on vetting is something else. Despite government assurances that the vetting database will only cover 11 million adults (still a very large part of the adult population), the estimates are open to question and it's fair to assume overreaction by public service authorities will lead the database eventually to include at least 14 million adults.

There is evidence already, from individuals who have spoken to us, that some employers are beginning to quiz would-be employees about the nature of the material they use for sexual titillation – which puts individuals in the highly difficult position of having to decide between being honest and not getting a job, or lying at interview and risk losing the job later.