That's the US government, of course

The US government has given its approval for the sale of sensitive military technology to the Saudis in the form of Eurofighter combat jets developed cooperatively by the UK, Germany, Italy and Spain. 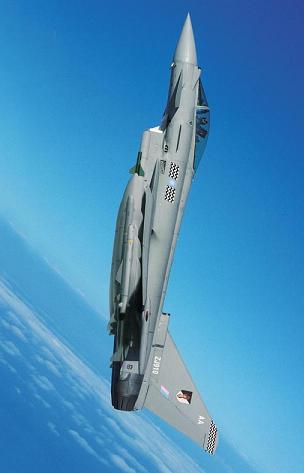 Headed for mothballs in the UK - and to the Saudis.

Washington's approval is necessary because the Eurofighter, despite its origins, contains a significant amount of American technology which was only supplied to the Eurofighter consortium on condition that they would have to ask to sell it on to other countries.

Such consent would normally have been pro forma in the case of the Saudis, a country often supplied with arms by the US (though America seldom lets the Saudis have its best and latest stuff, as the European nations plan to). However, the Saudi Eurofighter deal was set up by UK-US weapons globocorp BAE Systems, which is currently under investigation by the US Justice Department for possibly-illegal payments relating to an earlier deal, made to the Saudi Prince Bandar via a Washington bank.

The UK's Serious Fraud Office originally uncovered details of the payments in the course of a corruption probe into BAE's Saudi dealings. However the SFO investigation was shut down on the orders of Tony Blair, following a visit to Number 10 Downing Street by Bandar, in a move later described as "abject surrender" by British judges. Blair was said to have capitulated at the thought of the Saudis ceasing to cooperate with Britain's intelligence services; and also, perhaps, at the prospect of losing the Eurofighter order.

Following leaks by SFO investigators irritated at being muzzled on Saudi orders, the feds got involved across the pond. The Justice department appear to have been concerned that US approval for export of the Eurofighters would imply that BAE's dealings with the Saudis were kosher, in effect pre-judging their investigation, and there was some support in Congress for this view.

Now, however, the Financial Times reports that a deal has been done between the Justice and State departments. The approval document presented to Congress will be specially, uniquely worded, making it clear that no decision on BAE's conduct is implied - that the company may still be found to have acted corruptly.

The FT quotes Greg Suchan, formerly a State arms-transfer official, as saying "I have never seen anything like that as part of a section 36 notification".

The paper describes the sale of 72 Eurofighters to the Saudis as a "£20bn deal" and "A boost for Britain's largest defence contractor", meaning BAE.

BAE is indeed the UK's biggest arms contractor - though nowadays less than a third of its employees are in Britain - but Blighty will not see anything like £20bn. The planes are to cost £4.3bn, which will be shared with the other manufacturing countries - which will include Saudi Arabia, as only the first 24 aircraft are to be assembled in the UK. The other 48 will be made on a line in the Gulf.

The other £15bn will again be spent as much as possible in Saudi Arabia, on maintenance, training and support activities. This money will move through BAE's balance sheets, probably allowing the purchase of some more American companies, but will have little to do with British jobs or British GDP - though no doubt the UK will have the privilege of looking after the large numbers of expat Brits who will do much of the groundwork, after they get old and the Saudis don't want them any more.

In related news, the UK SFO is back in BAE's face again, arresting and interviewing Julian Scopes, the company's head of Indian operations and former boss of government relations. The anti-corruption plods also pulled in Austrian toff Count Alfons Mensdorff-Pouilly, while en route from his Scottish stately home to Vienna. Austria was the Eurofighter's first export customer; the count admits working as a "consultant" for BAE, but denies all wrongdoing, his lawyer told the FT.

Meanwhile, the RAF has just taken delivery of its first Tranche 2 Eurofighters. When Tranche 2 is complete the RAF Eurofighter fleet will number 144, already more than the RAF can use. However the service plans to buy an additional 88 Tranche 3 jobs, heavily modified at significant extra expense to the UK taxpayer (think £5-6bn if reports are correct) to accord with the RAF's grandiose deep-bombing plans.

A large number of the original Tranche 1 British planes, not much good for modern missions, will spend the majority of their careers in mothballs before eventually being thrown away.

Under this scheme, each operational UK Eurofighter will have cost at least £200m, more than an American Raptor ultrafighter. And Eurofighters don't - never will - have Stealth. And it turns out they're full of American bits anyway.®