Is that the Western Hemisphere in your pocket? 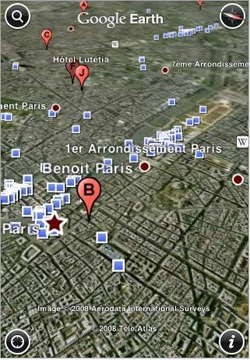 Like its desktop sibling, the application lets users fly around a 3D view of Earth made from aerial and satellite imagery. Google Earth for iPhone is available for free in 18 languages and 22 countries in the iTunes App Store.

The app makes use of the iPhone's touch screen and motion-sensing capabilities to navigate Terra Firma. Getting around the globe is done by the iPhone's usual affair of finger-swiping, pinching, and tapping. Tilling the device adjusts the view to see 3D terrain (3D buildings aren't yet available for the portable version). The app also takes advantage of the iPhone's location finder to quickly zoom to the user's approximate spot.

Google said it has included over eight million geo-located Panoramio photos and lets users read location-based Wikipedia articles too. (Clicking on Wikipedia articles, however, seemed to crash the app on the iPod Touch El Reg was using as often as not).

Google Earth appears to push the iPhone/iPod Touch near its graphical limits. It takes about 15 seconds to boot on startup and can be a bit of a slide show when you're browsing.

It's nonetheless an impressive piece of software and a novelty to fit comfortably in pants. It's also free, so no tears needed for any spotty behavior.

Google Earth for iPhone requires an internet connection for any meaningful use. Without access, the app reuses data saved from a previous session - which puts a serious crimp on exploration.

And exploration is really the whole point of Google Earth. There's a search feature included of course, but sooner or later the app will want to spit the user out into Safari or the Google Maps app if additional info and directions are needed.

Google provides a video tour of Google Earth over at the Maps team blog. ®