Don't put your business on the cloud, Mrs. Worthington

PDC That sudden drop in customers your Windows cloud application is experiencing could be because it's too popular and Microsoft is blocking your traffic.

Applications posted to Microsoft's Azure Services Platform that exceed their allocated storage or processing hours could see customers turned away, as the company tries to figure out how to run the fledgling utility computing service. 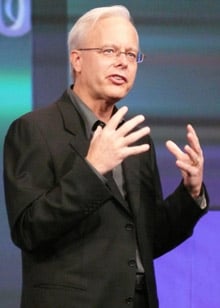 Rest assured, though, while you might not be able to sign up new customers or do any business, Microsoft will look after your data. It has promised not to dump it.

The disclosure came as Microsoft exhorted its Professional Developers' Conference (PDC) to participate in the limited Azure Services Platform Community Technology Preview (CTP) to help test the system. It's a sign Microsoft is unsure whether the hardware and software fabric it's rolling out is battle-ready or scalable ahead of planned availability next year.

"When you hit the quota...it's possible we will block access to your site," Microsoft's Manuvir Das told PDC after a session, Lap Around Windows Azure. Das did try to reassure potential developers blocking was not guaranteed, but noted: "We have the capability to do that and may have to do that."

Your Azure capacity is 2,000 hours of runtime and up to eight instances - an instance being a basic unit of computing. Microsoft measures each instance as a single 1.2 GHz CPU on one of its datacenter servers, with 2GB RAM and 160GB of hard-disk space.

Earlier, Microsoft's chief software architect Ray Ozzie indicated Microsoft was being cautious in the Azure rollout. Fundamental to the platform is a "fabric controller," used to manage and provision Windows 2008 servers, a version of SQL Servers called SQL Services for storage, and Microsoft's own document and data synchronization architecture. These are all relatively unproven.

Among the other uncertainties that became clear Monday was how Microsoft will charge. Das simply promised pricing would be "competitive," based on Service Level Agreements (SLAs) and consumption billing. Also there are no plans to make Azure available on anything other than Microsoft's own data center - yet at least.

Among the tangible plans: a menu that will let you select the type of computing service you'd like - such as CPU-heavy. There will be support for native code, and date centers and services will run in different geographic regions. ®