They don't work for you

Contrary to many a green claim, science has been unable to provide unambiguous advice from which climate change policies can be formulated. Hence Labour, the Tories, the Lib-Dems, the Greens, and various activists, have all made different policies, and argued that the others will lead us inevitably to environmental catastrophe. The CCC has been appointed in an attempt to settle the matter because matters of fact simply do not exist, and politicians lack the authority to make an 'ethical' argument for climate mitigation themselves.

According to the CCC, the 60 per cent figure which appears in the Draft Bill was based on advice given in a report by the Royal Commission on Environmental Pollution (RCEP) in 2000.

“Since the report, however, new information has become available”, says the CCC.

But this information is not uncontroversial, and no matter how many climate studies have produced research which reveal isolated trends that are worse than anticipated, it is the sum of their effects which is important. The Royal Commission produced its recommendation after considering a range of emissions scenarios and their likely outcomes in terms of global temperature changes. The IPCC in 2007 did a very similar thing. 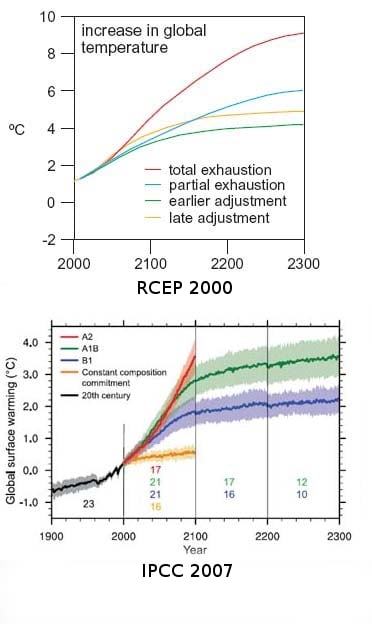 2007 saw the IPCC more optimistic about the extent of future warming than the RCEP were in 2000. So why isn't the CCC calling for a reduction in CO2 emissions targets?

Perhaps it could still be claimed that society is more vulnerable to climate than was previously understood. But, again, this is not “science”. It’s a speculative claim about the extent to which the direction of society is determined by climatic conditions – and exactly the kind of soft judgement which Turner admits. Yet the Committee is unable to reflect on the judgements it has had to make because reflection is beyond the Committee’s scope of enquiry. Moreover, The CCC’s members have no interest in doing so. Vested interests abound.

All aboard the gravy train

Lord Turner, who is also chair of the Financial Services Authority, was a trustee of the World Wildlife Fund, and a member of the Board of Advisors at Climate Change Capital, an “investment manager and advisor specialising in the opportunities created by the transition to the low carbon economy”. Turner's colleague, Dr Samuel Fankhauser, is the managing director of IDEAcarbon, which provides financial services in the carbon finance sector. The company belongs to the IDEAglobal group, whose vice chairman is Sir Nicholas Stern. As the company's website says:

“Working with the key decision makers who are shaping the future of the market enables us to accurately predict market trends and provide tailored strategic advice to clients.”

So the people who stand to profit from markets created by climate change legislation are instrumental in creating that legislation.

Another member of the CCC is Lord Bob May, who has been increasingly vocal about climate change politics in recent years. He said in the TLS last year that “there remains an active and well-funded ‘denial lobby’. It shares many features with the lobby that for so long denied that smoking is the major cause of lung cancer." But if May is worried about 'well-funded' financial interests influencing the Government, he might well take a hard look at the CCC itself.

So the small number of people who determine the UK's response to climate change are not independent, and appear to have professional, financial and political interests in both the escalation of the climate crisis, and legislation designed to prevent it. These interests and the wider establishment's political exhaustion are hidden behind the CCC's scientific authority – a virtue in accordance with climate change ethics.

As politicians have struggled to define themselves politically, they have retreated from democratic ideas. Voting is merely a formality – there are no ideas being contested, and legitimacy is sought instead from other public institutions such as 'science'. The purpose of new committees of experts is not to inform the climate change debate, but to create ethics for politicians to clothe themselves in. It gives seemingly legitimate purpose and direction to a purposeless and directionless establishment. The purpose of the climate change bill is not to save us from catastrophe, but to set the scene for a new climate change aristocracy to rule over us in its own interests. ®

Ben Pile studies philosophy and politics at the University of York, and is co-editor of the climate resistance blog.