Berkeley researchers think they have found a way to keep Moore's Law in action and get chip features down to the sub-10 nanometre level.

Currently Moore's Law looks stymied once chip features shrink to 35nm as a diffraction limit will prevent light beams or waves being used to create features smaller than that. This means that the 18 month doubling of transistor numbers on a unit chip area will stop and Moore's Law be no more.

The researchers, Xiang Zhang, University of California at Berkeley professor of mechanical engineering, and David Bogy, UC Berkeley professor of mechanical engineering, decided to use different, shorter waves. When light is shone on a so-called plasmonic metal material - nothing to do with Plasmon Inc.'s optical drives, by the way - its electrons vibrate and give out evanescent waves at a shorter wavelength than that of normal light. So, in theory, a photolithographic-like process could be used to concentrate light and create smaller features.

With photolithography, light is used to create a hardening reaction in photo-sensitive material which functions as a mask to prevent the underlying material being removed by acid in a bath, leaving etched areas of semi-conductor material. Repeated applications of this process are used to create the layers in the chip that create integrated circuits. The smaller the etched areas can be, the more densely can electrical components be packed in the chip. 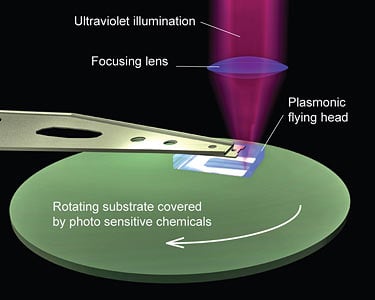 The two researchers devised a plasmonic lens, a 100nm one with silver material organised into concentric rings like a Fresnel screen. The lens flies 200nm above the substrate which revolves beneath it - imagine something like a vinyl disk recording arm - and uses microscopic scale aircraft wing technology to remain in flight. If the lens were a Boeing jumbo jet, it would be flying 2mm above ground level.

With this flying lens, they made features 80nm wide, which doesn't sound much, but they are quite confident they can get down to feature sizes as small as 5 to 10nm. This, they say, implies microprocessors 10 times smaller than those available today and more powerful as well.

The researchers believe up to 10,000 plasmonic lenses could be packed onto the end of the writing arm raising the possibility of parallel writes combining with the substrate's rotation to speed the chip-making process. The actual lithography equipment should also be cheaper than today's 45nm machines as complex lenses and mirrors would not be needed.

Another possibility is a form of optical storage with 10 to 100 times more data on a disk than single layer Blu-ray.

Productisation would take three to five years. Read more about these ideas in the December issue of Nature Nanotechnology. ®