Elite US special-forces troops have now been equipped with special uniforms featuring up to eight built-in drawstring tourniquet systems. Reports have it that thousands of the new anti-bloodloss trouserlegs and sleeves are already in use on the front lines in southwest Asia. 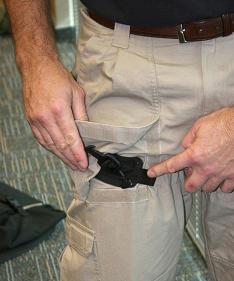 American military couturier and luggage house Blackhawk - providers of pouches, webbing, holsters and so forth to the various elites of the US forces - unveiled their Integrated Tourniquet System (ITS™) last September.

When an ITS-clad trooper, in the course of putting foot to ass for his country, has a limb severed - or perhaps merely springs a leak in a brachial or femoral artery - he or a nearby buddy can pull open a flap on his uniform and heave briskly on one of several cable-tie-esque assemblies built into his trouserleg or shirt sleeve. This will clamp off the spurting blood almost at once, avoiding the need to improvise a tourniquet from a bandage, neckwear, belt or whatever.

“The majority of preventable deaths come from loss of blood resulting from leg and arm wounds that is not protected by body armor. Sixty percent of preventable combat deaths are from extremity bleeding and 50-70 per cent of all combat injuries are extremity wounds,” said Blackhawk's "tactial medicine specialist", Dr Keith Rose.

"The fact that you can always find the tourniquet with the Integrated Tourniquet system and the speed with which you can immediately apply it will dramatically impact not only loss of life but also the amount of time that it takes to recover from extreme blood loss injuries."

Blackhawk said last year that ITS would be available in "Q1 of Calendar 2008". That appears to have been no empty boast, as Military.com now report that the famous yet secretive US Navy SEALs are wearing the new ziploc bloodspurt-stifling apparel in unspecified warzones to the tune of 1,100 sets.

The SEALs are known for their willingness to try out unconventional combat medicine techniques: rumour has it that they occasionally use feminine-hygiene tampons for staunching bullet wounds. There was no information as to just how many ITS drawstring tourniquet-cuffs had actually been used, however.

As Blackhawk note, it's common in military circles for new kit to be tried out first by elite units before filtering down to regular troops if found successful. It's also very normal for trendy military togs and accessories to then be taken up by civilians - for instance aviator shades, flight jackets, combat trousers, suit jacket cuff buttons* etc etc.

Blackhawk expect ITS™ to score well in civvy street, particularly in "the Law Enforcement and Outdoor communities". One might suggest that it could be even more of a natural fit for other, less clean-cut groups - intravenous drug users, for instance. ®

*Originally introduced by Napoleon Bonaparte, apparently, to prevent the French soldiery wiping their noses on their uniform sleeves.