NASA's Messenger spacecraft has now imaged 80 per cent of the surface of Mercury following its second fly-past of the planet on 6 October, meaning that around 95 per cent has been revealed by various missions, the agency reports. 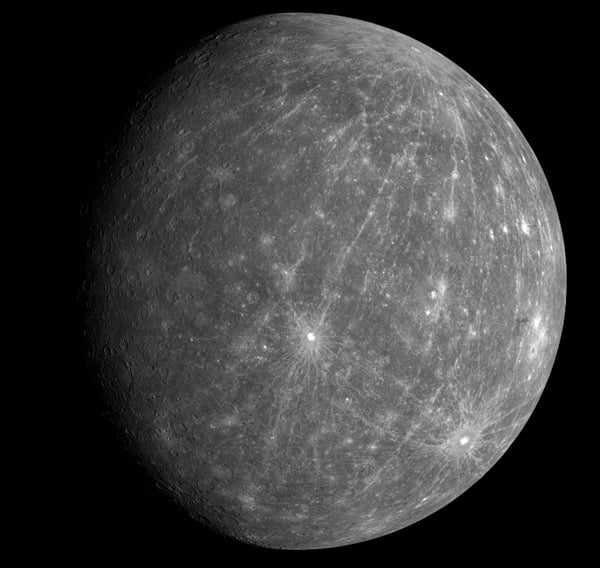 During the latest close encounter, Messenger snapped 1,200 images laying bare 30 per cent of Mercury hitherto unseen by a spacecraft. The above postcard was taken around 90 minutes after its closest approach.

Principal investigator Sean Solomon explained: "The region of Mercury's surface that we viewed at close range for the first time this month is bigger than the land area of South America. When combined with data from our first flyby and from Mariner 10, our latest coverage means that we have now seen about 95 per cent of the planet."

As well as grabbing some nice snaps, Messenger also deployed its laser altimeter (MLA) to probe the Mercury's topography and probed Mercury's magnetosphere, revealing that the latter is "highly symmetric".

Brian Anderson of the Johns Hopkins University Applied Physics Laboratory elaborated: "The previous flybys by Messenger and Mariner 10 provided data only about Mercury's eastern hemisphere. The most recent flyby gave us our first measurements on Mercury's western hemisphere, and with them we discovered that the planet's magnetic field is highly symmetric."

Regarding the topographical results, co-investigator Maria Zuber of MIT said: "The MLA collected altimetry in regions where images from Messenger and Mariner 10 data are available, and new images were obtained of the region sampled by the altimeter in January. These topographic measurements now improve considerably the ability to interpret surface geology."

The result of this mapping is the revelation that "unlike the moon and Mars, Mercury's surface is more homogeneously ancient and heavily cratered, with large extents of younger volcanic plains lying within and between giant impact basins", as co-investigator Mark Robinson of Arizona State University put it.

There's more on Messenger's hard-working instrument payload here. It will be busy again in September 2009, during the spacecraft's third and final flyby of Mercury prior to orbital insertion around the planet in March 2011. ®