Can't (yet) go any larger

Samsung has demo'd a 40in OLED full HD TV, but the company admitted that the screen is at the very limit of what it can manufacture today.

"This 40in TFT panel is the largest size that can be made on our pilot line, and it cannot be mass-produced right away," a company spokesman admitted, Japanese newspaper Nikkei reports. 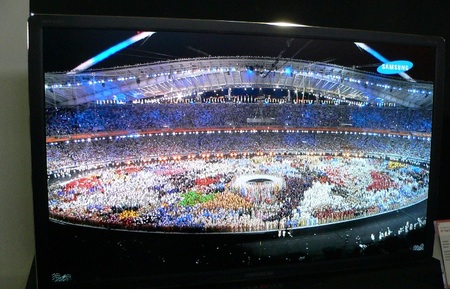 Samsung's screen delivers a 1920 x 1080 resolution, has a contrast ratio of a million to one, sports a 200cd/m² brightness rating and can show more colours than the US TV standard, NTSC, defines.

Samsung has, in the past, committed itself to release 40in and 42in OLED panels in 2010, so it's got more than a year to perfect its production process.

Today's TV-centric OLED displays are rather smaller - most notably Sony's 11in XEL-1 - but manufacturers have set themselves the target of making a 40in model, presumably the size they feel is necessary to show the technology as a viable alternative to LCD and plasma TVs.

Panasonic has promised a 40in OLED panel by 2011, and in Juy this year, the Japanese government offered manufacturers like Panasonic, Sony, Sharp and Toshiba cash to fund the development of a 40in OLED TV - before rival Korean companies, Samsung in particular, get there first and dominate the market.