Lining up the ducks

Exclusive What happens when you put three economists from the internet, telecomms, and the music businesses in a room and don't let them out until they've agreed on something useful?

A paper published by the research unit of the British composers' collection society today gives us a clue. The first results of a "knocking heads together" exercise, entitled Shadow pricing P2P's economic impact, doesn't offer any ready policy proposals - partly as a result of compromise - but it does offer a framework that's better thought out than most attempts so far.

The paper identifies three elements of the supply chain in the digital age. There are what it calls MSPs or Music Service Providers, such as PirateBay or iTunes, for example; MRPs or Music Rights Providers such as ASCAP or the PPL, and ISPs. When these groups are lined up in a Game Theory Prisoner's Dilemma situation, the paper suggests, there is a high risk of a "sub-optimal outcome." That's a diplomatic way of saying everyone loses.

Rights providers would be tempted to continue to shun the digital market, ISPs continue to bear heavy costs and potential liabilities and stick with delivering music to their customers using the unlicensed MSPs (eg via Bittorrent trackers), and the MSPs remain at the mercy of the others, so fail to invest. 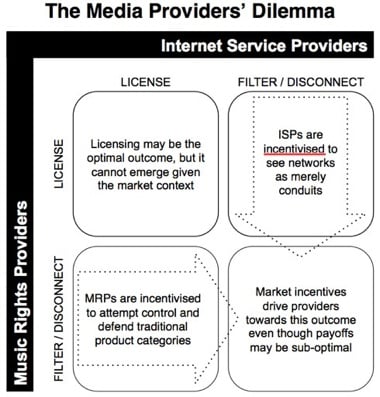 All the while, the amount of unlicensed music continues to dwarf licensed music - which again discourages parties to seek a licensed settlement that captures some of the market's value. There are some odd side-effects to this situation - unlicensed MSPs (Torrent sites) mean we pay more for our network connections than we need to, for example, as well as making legitimate music more expensive.

Instead, the authors call for a new approach:

"The incentive structure under which media providers operate should be reconsidered and restructured," the authors write.

To date, MRPs proposals have focussed on discouraging the flow of music: by litigating against unlicensed MSPs (Kazaa, the original Napster) and ISPs (calling for filtering, disconnection, or letter writing campaigns). But instead - "shadow pricing and exchanging the market costs of externalities might provide of a structure for realigning incentives." 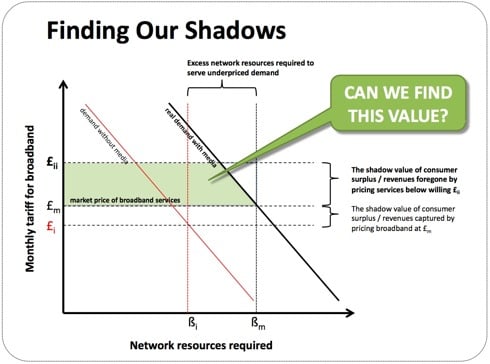 Lumping together licensed providers such as Apple and Amazon with unlicensed services such as PirateBay might induce apoplexy in old record company types, but it does give a shape to what the music business has been missing.

So what to do? There are four possible approaches, according to the authors. The first option, "do nothing", means the negative externalities simply pile up. The second is to step up litigation and prohibition. However,the paper notes, "there is little evidence suggesting the costly process of pushing down on the black market will indeed raise up the demand for the licensed market."

The other two options involve licensing file sharing networks: pulling services like the old Napster or Oink into the legitimate market. There's a flat tax or levy approach to charging for this - sticking (for example) £2 on everybody's monthly broadband bill. However, this may cause more problems than it cures, the authors caution - since nobody has an incentive to invest in creating or promoting new music services.

But there's also a voluntary subscription method of offering these. More work is needed on this too, the authors recommend, such as calculating the effect on today's players such as iTunes and the displacement costs. But the inference we are invited to make is that this is the most attractive of the four, provided the incentives can be lined up.

"Fixing the broken supply chain between content and connectivity provides more reasons to invest... Not only does the market become more buoyant, due to less leakage and more reward, but it also becomes more diverse - as those songwriters, publishers, artists, and record labels currently contemplating leaving the industry choose to stay, whilst more parties - be they rights holders or rights users - outside of the industry they choose to enter."

The authors are the MCPS PRS Alliance's chief economist Will Page, STL Partners' Keith McMahon (the Telebusillis blogger), and David Touve, a veteran of music start-ups.

Page and McMahon have written for El Reg before. We'll have a link as soon as one is publicly available. ®