USA '08 If the US voters reporting flipped votes in early balloting for the US Presidential race think they have it bad, they haven't heard of Homer Simpson's plight.

In this Sunday's episode of The Simpsons, the lovable loser enters a voting booth for this year's presidential election and is surprised to find a touch-screen machine. "Ooh, one of those electronic voting dealies," he says with glee. But after casting his ballot for Democratic candidate Barack Obama, Simpson is shocked to hear the machine reply, "One vote for McCain. Thank you."

"No, I want to vote for Obama," Simpson replies. As the increasingly frustrated fat man repeatedly presses the Obama portion of the touch screen, the machine responds: "Two votes for McCain," then "three votes for McCain" and finally "Six votes for President McCain."

After Simpson roughs up the machine and declares it rigged, a bottom compartment opens and sucks him into it. Bloodied and unconscious, Simpson is eventually spit back out.

The parody, which is already available online, just goes to show how deep distrust of electronic voting has seeped into the American psyche. It comes amid a flurry of warnings about computerized voting systems that can cause votes to be lost or miscounted because of malfunctions. The reports include: 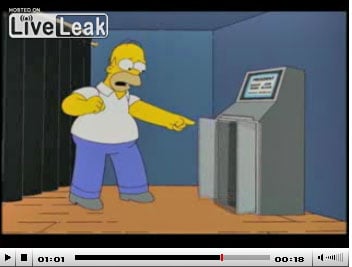 Your voting machine won't eat you. But it may eat your vote. ®

Swiss electronic voting system like... wait for it, wait for it... Swiss cheese: Hole found amid public source code audit

Hey, at least it was discovered, eventually, and fixed – which is the whole point

Judge: Georgia's e-vote machines are awful – but go ahead and use them

US court says no time to get paper ballots in place for November – eek!

Good thing Congress has been so forceful in improving security