One of Blighty's top aero engineers has tried to open up a debate on the conflict between quietness and greenness in the next generation of airliners. However, most of what he actually said has been obscured by a report stating that he is calling for the introduction of nuclear-powered airliners.

Professor Ian Poll FRAeS is a heavyweight aero boffin. On Monday night, he gave the annual Lanchester Lecture to the Royal Aeronautical Society, on the theme The Optimum Aeroplane and Beyond - rising to the opportunities and challenges of the 21st century. Among other things, Poll works at the Omega Foundation, a quango dedicated to sustainable aviation.

Prior to the lecture, Prof Poll spoke to the Times, outlining some of his ideas. The Thunderer then ran this piece, headed "Nuclear-powered passenger aircraft 'to transport millions' says expert". 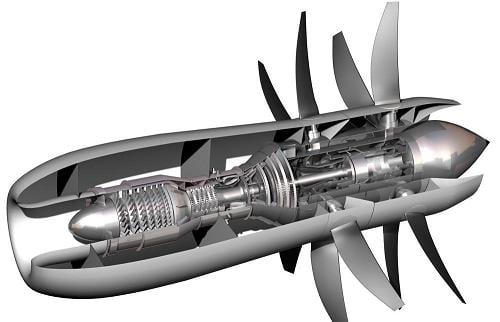 Most of the article focuses on some trials run by the US military back in the 1950s, when it was thought that nuclear-powered bombers able to stay airborne for long periods would provide counterstrike abilities even after a devastating pre-emptive attack by the Soviets. A nuclear jet engine had some ground runs, and a converted B-36 did carry a working air-cooled reactor on a number of flights, but merely to gather data: it used ordinary engines to fly.

In the end, nuclear-powered submarines - much harder to locate than bombers - took on the nuke counterstrike mission, and the atomic aircraft idea was shelved.

But now Professor Poll is calling for the idea to be revived! That's news, though it seems a little far-fetched.

We gave the prof a call.

"I spoke to the Times for an hour and a half," he told The Reg. "I did mention the American tests - I said the idea of nuclear powered planes is not forbidden by the laws of physics, and it's the sort of thing which could happen beyond 2050, maybe. That was it, two minutes. But it's the only thing they wrote about."

So what did he actually want to discuss? How could the aviation industry wean itself off hydrocarbons, or at any rate use less of them?

"In the short term, we need to get new technologies into the new generation of single-aisle airliners," says Poll. "The existing planes will be replaced in ten years, they'll be flying for a long time - it's a big opportunity to cut down on fuel burn and greenhouse burden."

The professor believes that the key bit of tech which can be ready to go in time is "open rotor" engines, a bit like a modern high-bypass turbofans writ large and with the outer duct removed. Prototypes have been around for decades, showing potentially excellent fuel savings, but open-rotor engines haven't made it into airline service because they are so noisy.

In fact, that's the big debate in the near to mid-term future of aviation, according to Prof Poll. Not nuclear versus conventional, but noise versus carbon. Airport noise limits, says Poll, are already causing increased emissions. The in/famous Airbus A380 superjumbo, for instance, has a "cruise fuel burn penalty" which is a direct result of design steps taken to make it meet Heathrow noise limits.

Local campaigners and their insistence on noise curbs are actually damaging the planet already.

In the same sort of tradeoff, the professor says that open-rotor engines can certainly be made quieter - but at a price in terms of fuel burned and carbon emitted.

"It's a problem to be solved," he says. "But there will be a cost in terms of fuel economy, and therefore carbon... there's a contradiction there."

In other words, being against airport noise is not the same as being green - quite the reverse - unless you also believe/accept that air travel should largely stop. (That means a return to the days when travel, other than to go to war or to migrate, was strictly for the rich.)

Much of the hatred directed against aviation in the UK is actually noise nimbyism, then, not any form of environmental concern.

Indeed, if we as a nation actually want to get serious about reducing aviation carbon emissions - or be less dependent on imported fuel, an issue which will definitely need facing even if global warming is a total fantasy - we should tell people living near Heathrow to shut up and accept more noise. That's not something they're going to want to hear, of course. But do they have the right to destroy the planet and/or the UK's energy security, economy etc purely for their own selfish comfort?

That's the issue for the near future, then. Indeed, to inform the debate, Omega are currently running a study into the noise/carbon balance in open-rotor engines.

But what about the longer term, when the last of the oil really is gone - when the shale and tar sands have played out, when the polar caps and Russia and Iran have all been drained of every drop?

Will it be time for the nuclear jet then?

Professor Poll, fingers no doubt a trifle scorched after the Times piece, was unwilling to foretell a future of atomic planes. But he did say that indirectly nuclear-powered aircraft were likely in the long term.

"Look at France," he said. "They have nuclear powered trains, don't they? It's an electric train, but almost all their electricity is nuclear. So in a sense, that's a nuclear train.

"We could see aircraft in the 2050 timescale powered by various fuels - hydrogen, or perhaps synthetic hydrocarbons - and the fuel could be made using nuclear power.