Review When you’re watching TV you want to be directly in front of it, right? So why should a manufacturer make a fuss about a TV's sides, specifically how thin they are?

Even more puzzling is the fact that greater thinness actually does make a difference, as this sleek TV from Hitachi proves. 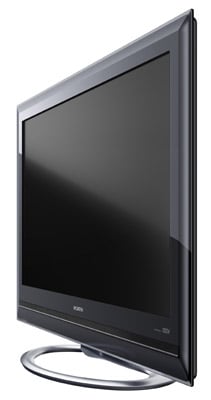 Hitachi's UT32MH70: only 39mm at its thickest point

If you’re sitting almost anywhere except straight in front of Hitachi’s UT - for "ultra-thin" - TV, the frame’s lack of depth is pleasingly noticeable. So pleasing, in fact, that you might be tempted to angle the screen slightly so that when it’s not switched on, visitors can’t fail but notice your size-zero model.

It’s 39mm at its thickest point, which is about a third of the thickness of a typical LCD TV. We know there are even more anorexic models on the way from manufacturers, like one at 9.9mm from Sony, but for now 39mm is still impressive, especially when mundane elements such as the power supply have had to be starved to fit them in.

Other items, such as the digital and analogue tuners, have been left out, supplied in a separate box, and that keeps the screen slim, too. It also has a happy knock-on effect in terms of weight – the Hitachi is under 11kg. And that means that if you want to hang your TV on the wall, you may not need to get the brickwork re-enforced first.