The good kind of UI theft

Review Canonical, the developers behind Ubuntu Linux have release Intrepid Ibex, the successor to last spring's Hardy Heron release. Ibex isn't a long-term support release - which might put off some large organizations - but for Ubuntu desktop fans, version 8.10 makes a worthwhile upgrade.

If you made the leap to Ubuntu 8.10 when it was released last week you may be scratching your head wondering what the fuss is about. The answer is that it might be a few days before you appreciate the small tweaks and overall streamlining in this release. Naturally, there are a slew of new and updated packages - GNOME 2.24, GIMP 2.6, and more - but much of what we love about 8.10 is more subtle.

That said, there are two major changes likely to have an impact on almost all users - the updated NetworkManager app and the new X.org 0.7.

First the positive stuff: The new network manager rocks. Ubuntu has completely revamped the network config panel, and you can now manage wired, wireless, and 3G (GSM/CDMA) connections all in one spot. The 3G features offer a nice wizard that will walk you through tethering to your phone (note that we aren't blessed with compatible 3G phone, so we couldn't test this feature). Presumably the 3G features would work with onboard devices as well, which should be good news for any Ubuntu loving netbook hackers out there.

Another very nice touch - network setup via NetworkManager starts during boot up, which means you don't have to wait for your desktop to load and then wait again while it connects to the web.

The new NetworkManager is a huge win for Ubuntu, and it offers the slickest, simplest network setup tools we've seen in a Linux distro. 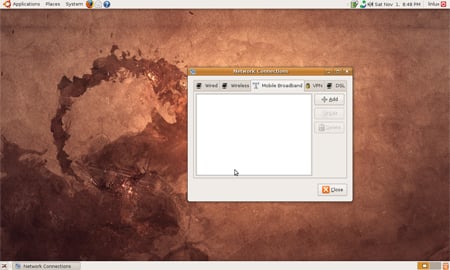 Unfortunately we can't say the same for the latest version of X.org. X.org .7 looks nice at first glance. It offers much better support for hot-swappable devices like tablets, keyboards, and mice. As an added bonus, there's no need to mess with the config files - everything should just work.

Normally we'd call that a good thing, but Ubuntu isn't just deprecating the X.org configuration file. It's gone - as in not there, nada, zip, zilch. It'd be nice if everything did just work, but somehow that seems unlikely. Minus the power of hand editing, your config files flies in the face of Linux's fabled customizability. Even if it does just work, what if you want it to just work your way?

It'll be interesting to see how this fully-automated X.org feature goes over with the Linux power users who've been hand-tweaking their files since before most of us knew how to pronounce Ubuntu.

Also worth noting is that Ubuntu 8.10 drops support for some older, proprietary nVidia video drivers. The 71 and 96 series of nVidia drivers (previously available in the nvidia-glx-legacy and nvidia-glx packages) are not compatible with the version of X.Org that ships with Ubuntu 8.10.

If you've got an affected nVidia card, there is a free nVidia driver available instead, but unfortunately that driver does not support 3D acceleration. It would have been nice if Ubuntu had waited for driver parity before dropping the old, but they didn't so if you're affected and you don't want to lose 3-D support, don't upgrade to 8.10.

Next page: Bring out the GIMP
Page:

Remember the 12-year-old who revived the Unity desktop? Both that and fellow unofficial remix Cinnamon are looking great
OSes26 Apr 2022 | 43