The good kind of UI theft

Bring out the GIMP

Now that we have our major gripes with Intrepid Ibex out the way, let's look at some of the very nice and welcome changes like the kernel upgrade, the latest version of GNOME, GIMP 2.6, and other good stuff.

Although nearly every Ubuntu release features an update to the underlying Linux Kernel, the average home user isn't likely to notice it. But this time around there's a good chance you will. Ubuntu now uses version 2.6.27 of the Linux kernel the new ath9k wireless driver from Atheros. The driver means it's now much easier to get up and running with Ubuntu on a slew of new laptops. The kernel update also introduces improved support for webcam hardware - if you're into that sort of thing.

Ubuntu 8.10 also sees a significant update to GNOME, which is now at version 2.24. You'll find some welcome user interface improvements in the new GNOME, most notably tabbed file browsing. Other improvements in GNOME include the Deskbar search app which can now perform tricks like calculator operations and Google searches. It can even update your Twitter account. Unfortunately, it still isn't all that great of a search tool compared to Vista or OS X's search mechanisms. 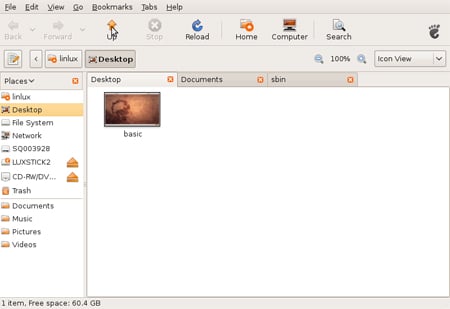 If you've been following GNOME development, you'll also be aware that the latest version features a new instant messaging framework by the name of Empathy. However, the Ubuntu developers have opted to retain the old client, Pidgin, until Empathy has time to mature.

There are a few other things missing on the software front, perhaps the most surprising is the new OpenOffice 3.0, which did not make Ubuntu's cutoff date. On the plus side, you do get the latest version of GIMP, which is probably a more important update.

There's a very nice new utility that makes creating a bootable USB version of Ubuntu a snap. All you need to do is select an ISO file and click "Make Startup Disk." Also possibly useful is the new "Cruft Remover," which takes a stab at removing unused packages from your system. Unfortunately packages coming from outside a repository seemed to confuse it. We accidentally deleted VirtualBox and Adobe's AIR platform. While many might consider the latter to indeed be "cruft," heed our warning and exercise some caution with the Cruft Remover. 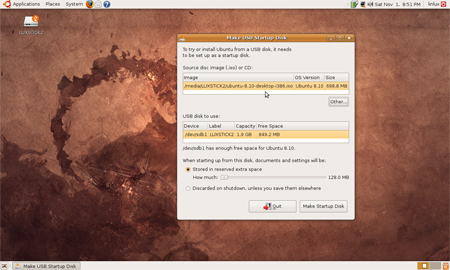 Also worth mentioning is the new encrypted private directory feature. Once enabled - just install the ecryptfs-utils and ecryptfs-setup-private packages - you'll find a new Private folder in your /home directory. The Private folder is actually an encrypted filestore, which automatically locks and unlocks when you log in and out. Using it, or any files in it, is effectively seamless and much easier than encrypting individual files or folders.

If the new encryption tool gains enough popularity with users, the Ubuntu development team has suggested that future releases may offer an easy way to encrypt your entire /home folder.

Next page: The 'dark' theme
Page:
Tips and corrections
115 Comments

Chrome OS: Yo dawg, I heard you like desktops so we put a workspace in your workspace