Page says the breakthrough had come via Andrew's father Martin Bud, a businessman and researcher whose work had informed a now obscure tome with a distinctly unsexy name. John Goodell Brown's Statistical Forecasting for Inventory Control was published in 1957, and is now out of print. But it forecast the digital world far closer than anything in WiReD.

"In many ways, we've been in the Long Tail business since 1914", says Page, referring to the UK copyright collection society the MCPS-PRS Alliance, where he is chief economist. “That's what collective rights licensing is. It doesn't matter if a song is a hit or niche, once it's been licensed under a blanket agreement so there are no barriers to using it."

And neither lead economist agrees that the Tail will be any more prevalent when P2P file sharing is taken into account. If anything, it's more pronounced, Page suggests:

"Look at Radiohead's experiment. Even when they reduced the price of copyright to free, there were 2.3 million downloads in the first three weeks - and 400,000 in a day. This was perhaps the most pirated piece of music of all time - and yet every fan could get it legally without paying. So the black market could potentially be even more concentrated."

For Page, the grain of truth in the digital music revolution is buried beneath a mountain of nonsense.

With cheap production tools and the internet as a new distribution channel, some costs of production are indeed lowered, and some artists can indeed cut out (or "disintermediate") the middle man. But those old rules still make a significant difference to your business strategy.

"In particular, the division of labour and economies of scale still have tremendous relevance to understanding today’s market”, Page notes.

“The Long Tail Movement is in trouble”

The division of labour means it can benefit you to employ a specialist intermediary, while economies of scale mean the bigger you are, the better terms you can negotiate.

"What's interesting, from a collecting society's perspective, is that when you have a dramatic increase in both rights holders on one side - more artists and songwriters - and rights users on the other side - an explosion of more digital music start ups - then, regardless of what the Long Tail is or isn't, the case for a common platform grows. This common platform pools rights, reduces transaction costs and prevents fragmentation - and everyone sees benefits.

"Otherwise those start ups won’t get started - and those performers and songwriters won’t get paid".

"It's an excellent book and thoughtfully written. But The Long Tail receives very little numerical examination. Saying the Tail has great value is not borne out by the evidence in this case."

Anderson's inspiration was the desire to put a positive spin on a depressing observation. An essay by Clay Shirky suggested that weblog readership followed a Pareto Curve (or "Power Law") - which dismayed many early Web 2.0 evangelists. Early bloggers began to lose faith. The Long Tail helped bolster morale - although its success owed much to sloppy thinking - and in particular, metaphorical logic.

This supposes that because one thing is like another, it exhibits the same characteristics. For example:

To see how far this can travel, once borne on the heady vapors of Web 2.0, take this passage by Jack Schofield in The Guardian from 2006:

"The Long Tail is making an impact because it is a powerful idea that provides us with a new(ish) way of looking at the world. Copernicus did the same thing for many people when he pointed out that the earth went round the sun, not vice versa, though no planetary bodies were physically moved in the process." 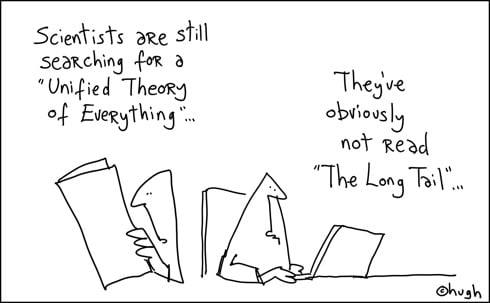 The propensity of journalists - even highly experienced journalists - to fantasize about the world rather than examine it critically is one of the defining features of modern technology coverage.

As Andrew Bud puts it - "The Long Tail created a Movement, and it's the Long Tail 'Movement' that's in trouble." 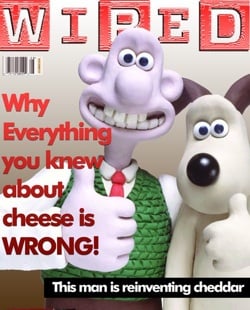 Page is making a habit of debunking the WiReD clique that is the source of so much bad business advice. We published his response to Kevin Kelly (WiReD's founding editor) - Can 1,000 fans replace the music business? - here earlier this year. More of his work can be found online here. ®

[Disclosure: your reporter's explanation of Californian technology utopians was credited in this presentation]